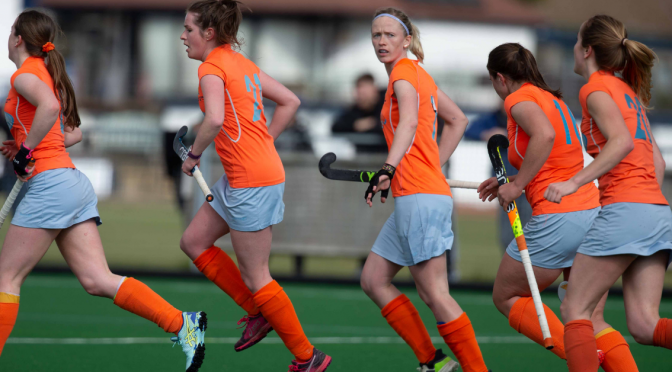 Clydesdale Western 1s closed the goal difference gap in the Women’s Premiership to keep the heat on league leaders Watsonians 1s on Saturday – but had their league and cup double aspirations ended on the Sunday after conceding a late goal in the Women’s Scottish Cup Semi Final against Edinburgh University 1s.

The L1s put seven past Hillhead 1s at Upper Windyedge on Saturday in the league. Watsonians won by five goals against GHK 1s on the same day, meaning Derek Forsyth’s side are behind their Edinburgh opponents by three in the goal difference stakes. As the situation currently stands, ‘Dale Western would need to win their remaining three games as well as holding a better goal difference tally against Watsons come the end of the season. But any hopes of a Scottish Cup win were ended at the last four stage of the competition courtesy of a single goal in the final quarter by Edinburgh Uni at Peffermill.

Against Hillhead on Saturday, the Titwood girls started the contest well, holding a favourable amount of possession in the early stages. It was no surprise when midway through the opening quarter the away side scored the first of seven goals through Fiona Semple’s deflection from a short corner. Shortly after, Holly Steiger doubled the away side’s lead by reversing in from a one on one situation. The next three goals came from penalty corner moves starting with a deflection from Heather O’Brien followed by two strikes from captain Frances Lonergan either side of half time. In the final quarter, the L1s stepped up their bid to find more goals and youngster Anna Winter got in on the act with Clydesdale Western’s sixth before O’Brien deflected in from Karin Belch’s pass from another corner routine to complete the scoring at seven.

On Sunday in Women’s Scottish Cup Semi Final, Forsyth’s side dug deep against an Edinburgh University side that only a couple weeks before had ran out 4-1 winners in the league. Both sides gave a good account of themselves with plenty of chances being created, particularly from penalty corners. With the tie looking like it was heading to running penalties, Uni forced the ball in to score late in the fourth quarter. Despite ‘Dale Western’s hope of a late recovery, they were unable to find an equaliser ending their cup hopes, meaning focus will now be solely on the final weeks of the Women’s Premiership title race.

Clydesdale 1s hopes of finishing third in the Men’s Premiership are over after succumbing to a relentless second half comeback from champions elect Western Wildcats 1s at Titwood on Saturday.

The M1s were 3-0 up by half time following a superb first half performance. It was nearly a month ago that Clydesdale recovered from three down away to Western to take an unlikely point right at the death. But this time around the Titwood boys were on the receiving end as Wildcats went not one but three better by scoring six unanswered goals after the restart – the first from the spot followed by five penalty corners – to leave themselves on the brink of being crowned league champions. For Clydesdale however, their ambitions of a top three finish come the end of season were extinguished following Edinburgh University 1s 6-1 win away to Watsonians 1s.

Ciaran Crawford’s side got off to a flying start when skipper Andrew Allan converted a penalty corner in the opening exchanges. An award of a penalty flick soon after saw David Nairn double ‘Dale’s lead before Euan Anderson lifted home a loose ball from another penalty corner just before half time to make it 3-0.

The conversion of a penalty flick awarded to the away side in the second half was the catalyst to a recovery by the league leaders who then added a second before the end of the third quarter. The home side did have chances to score a fourth, with the closest opportunity falling to Jack McKenzie who flashed a shot just past the post. But it was in the fourth quarter where the game was settled as Western devastatingly added four more penalty corners to the scoreline to run out 6-3 winners.

The L2s hopes of knockout glory were ended at the hands of CALA Edinburgh 1s on Sunday at Glasgow National Hockey Centre.

Donald Amour’s side were involved in the Semi Finals of the Women’s Scottish Plate against Women’s National League side CALA Edinburgh. Despite a great effort, the L2s conceded two goals as CALA booked a place in the Final of the Women’s Plate to face Edinburgh University 2s. The day before, ‘Dale Western 2s had to come from a goal down to record a 3-1 win at home to Glasgow University 2s in the A Division of the Women’s Championship at Titwood. L2s captain Rhona McGregor grabbed an equaliser before Sophie Highet put the home side in the lead. Youngster Rachel Brown was also on the scoresheet to confirm the win.

Earlier in the day, the L3s, in B Division of the Women’s Championship, beat Hillhead 2s 4-2 at Titwood. Rachel Whittle scored a brace whilst Karen Longmuir and Amy Li scored one goal each.

The M2s lost in their Men’s Regional Division home clash with Western Wildcats 2s. The visitors were 2-0 up just before half time, but Ewan Fraser pulled a goal back with an impressive first time volley. But sadly, it was not able to propel Stuart Banford’s side into a comeback as Wildcats scored a third shortly after the break and that was how the scoreline would remain. The M5s Development lost by a solitary goal to Kelburne 4s at Glasgow National Hockey Centre in Men’s West District Division Three.