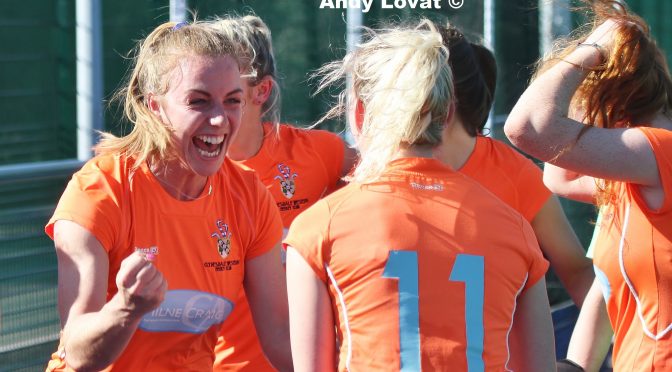 Before the game, Edinburgh University held a five point lead over the home side with two games to play.  Which meant only a point from this game was required for Uni to win the league.  But it was ‘Dale Western who started the game impressively.  Five minutes was played when captain Ali Howie slammed the ball into the visitor’s goal after an initial L1s move had temporarily been halted.  From then on, Uni had large amounts of possession but could not find a way through the home side’s sturdy defence.

The second half started like the first – Clydesdale Western doubled their lead when Emma McGregor found herself free in the penalty circle to slide the ball under Edinburgh University’s goalkeeper.  The pattern of the second half continued in similar vain to the first, with the away side stepping up their attempts to force a goal back but could not find a way past ‘Dale Western ‘keeper Jessica Buchanan and a solid defence in front of her.  Despite Uni pulling their goalkeeper in favour of an extra outfield player, Clydesdale Western held firm to take the victory and close the gap at the top to two points going into the final game of the league season.

Clydesdale Western next play Dundee Wanderers on Saturday (28th April, 2.00pm PB).  The only set of results that can see the L1s take top spot in Women’s National One is if the L1s beat Dundee Wanderers and Western Wildcats beat Edinburgh University – with those sides playing at Auchenhowie on the same day.

Clydesdale Men’s 1st XI secured their highest league finish in Men’s National Division One in recent seasons after an entertaining draw against Edinburgh University at Titwood on Sunday.

The result means Clydesdale 1s will not play in a relegation play off, but their hopes of gaining a European Top 4 Play-Off spot are over following Western Wildcats 2-1 win over Dundee Wanderers – the M1s will finish the 2017-18 season in 5th of Men’s National One.

In the game itself, Clydesdale started brightly and scored a lovely opener from Aidan Black.  Black played a quick one-two with Danny Cain before running into the D and hitting a shot past the Uni goalkeeper to give ‘Dale the lead.  But the students levelled late into the first half after an initial shot had been kept out by Clydesdale ‘keeper Gordon Clark.  The away side then took the lead in the second half before Struan Walker scored his 12th goal of the season when he crashed home a penalty corner, giving both sides a share of the points.

Clydesdale Western 3s handed initiative of the Women’s Championship Division One table back to ‘Dale Western 2nd XI after beating Edinburgh University 2s in an early afternoon game at Titwood on Sunday.

Uni 2s, who had beaten the L2s 3-1 the previous day, went in to the game knowing wins in their remaining games would seal the Championship league title.  But away side had no answer to what was a fantastic goalscoring performance from Gill Green in which the veteran scored all four of the L3s goals in a 4-2 win.

The result now means if the L2s win all of their remaining games, they will be champions of the Championship league.  The L3s remain in the 5th place, two points behind Grove Menzieshill 2s.

Clydesdale Men’s 2s produced a stirring late fightback to take a point against an impressive performance from a young Western Wildcats 2s side in a late afternoon pass back at Titwood.

The M2s found themselves in disarray in the first half, falling two goals behind.  A Wildcats forward escaped the attention of two ‘Dale defenders before beating ‘keeper Dougie Mann to score the opener.  Wildcats then doubled their lead from a drag flick at a penalty corner.  The home side then got a goal back just before half time after impressive play down the right hand side from Steven Clark and Antony Small, with the latter squaring the ball for Jeetinder Berman to tap into an open goal.

Wildcats restored their two goal lead, however, when another forward flicked into the far corner from an angle close to the right base line.  Despite the home sides best efforts, it looked as if the M2s were going to fall to their fourth defeat in a row after chances came and went for Colin Gambles and Andy McAllan in particular, as well as some last ditch blocks and tackles from the Wildcats defence.

But with under five minutes to go, the M2s scored their second after a switch left penalty corner went in untouched from Blair Paul before Michael Cockburn hit a quick snapshot low and hard into the bottom left corner to equalise and earn the home side a point.  The result means the M2s are a point clear in 3rd place of Men’s Regional Division One.

Well done again to all of our teams over the weekend for some crucial results and great performances!