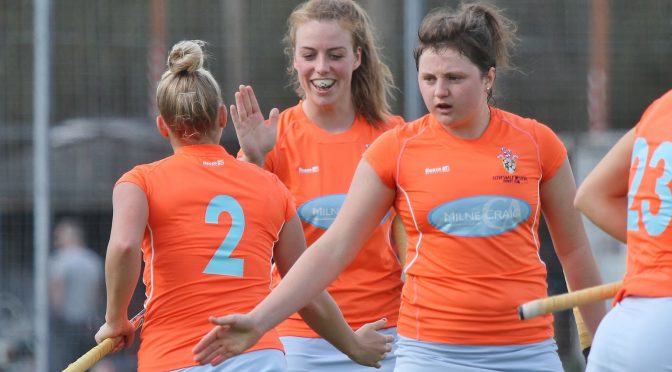 Clydesdale Western maintained their 100% start to the Women’s Premiership season as a second half short corner strike from Jen Eadie was enough to give Clydesdale Western 1st XI a narrow win over Play-Off champions Western Wildcats 1s at Titwood.

Eadie’s goal midway through the third quarter settled what was a tense and, at times, scrappy affair.  The result gives ‘Dale Western 1s three wins from three going into next weekend’s clash with league champions Edinburgh University 1s.

The first half saw Clydesdale Western arguably shade possession stats.  Chances would come through Lexi Sabatelli and Eadie from a penalty corner, but Wildcats kept the home side at bay.  The away side themselves had chances, but L1s goalkeeper Jessica Buchanan was equal to the task, making two quick fire saves in the second quarter.

The second half became more of a cagier contest, with the both sides probably fortunate to keep their respective elevens on the pitch with late stick tackles and fouls.  Approaching the ten minute period of the third quarter saw Clydesdale Western break the deadlock.  A penalty corner awarded by Anna Watson saw Eadie sweep a shot from the top of the circle which crept its way over the line via a Wildcats deflection.

The L1s were impressive seeing out the remaining minutes of quarter three, but were under pressure in the final quarter. Wildcats stepped up their intentions to pull a goal back, and were nearly rewarded but Buchanan had to make another important save from a reverse stick shot.  The away side also had a couple of corner chances, but were put wide of the ‘Dale Western goal.  The L1s finished off the game to take the points, clinching their third straight win of the league season to place 2nd in the Women’s Premiership – setting them up nicely for the visit of last season’s champions Edinburgh Uni on Saturday (12th October).

Clydesdale Men’s 1s tasted defeat for the first time this season in the Men’s Premiership after losing to Play-Off rivals Edinburgh University 1s at Peffermill.

A goal each from Andrew Allan and Struan Walker was not enough to save the M1s as they remain on four points in the league table.

Uni 1s took the lead with a goal that saw the home side transfer the ball before crashing into the circle which was deflected by a forward past ‘Dale goalkeeper Sean Mahoney. The M1s foraged an equaliser not long after when good build up play got Walker on the ball, who drove into the circle before forcing a stick tackle resulting in a penalty flick – duly converted by Allan.

The student side then hit two penalty corner goals in quarters two and three through ex-Clydesdale boy Jack Jamieson. Jamieson flicked both high to leave Mahoney and the ‘Dale defence with no chance to save them. The goals could have arguably been somewhat harsh on Clydesdale given the positive approach in their hockey. And that positivity brought them back a goal back as a high press collected possession, releasing Walker into the D to fire a reverse stick shot into the far bottom corner.

It was a bag of mixed results for the remaining nine teams of Clydesdale & Clydesdale Western, which included two big wins and four draws.

The M2s started the day with a crushing 5-1 defeat to an impressive Western Wildcats 2s performance at Auchenhowie in Men’s Regional Division One. The home side took a 3-0 lead, before Henderson’s deft deflection pulled a goal back before half time. It prompted the adverse reaction in the second half as Wildcats 2s pulled away with another two goals. The M3s were involved in the same scoreline at home to Dumfries 1s in Men’s West District Division One – but instead were on the right side of the result. A double from Lewis MacKay set the M3s on their way, whilst Jordan Canning, Ruairidh Callaghan and a rare goal from skipper Craig Bradley completed the scoring. In Men’s West District Division Two, the M4s were unfortunate not to also take three points when they played Oban 1s at Hermitage Academy. A goal each from Logan Forsyth and Spencer Cox saw the M4s 2-1 up with five minutes to go for closing out the win. But Oban 1s scored an equaliser at the end to take a share of the points. The M5s were comprehensively beaten by a fairly experienced Uddingston 4s side in Men’s West District Division Three, going down 6-1 at Hutchesons’ Grammar School, despite a goal from youngster Miles Macaulay.

For Clydesdale Western, there were three 1-1 draws, two of which came in Women’s Championship Division One. The L2s are two games without a win after drawing to Stirling University 1s at home – Kate Moffatt being the goalscorer. Whilst the L3s maintained their unbeaten start to the season, taking a point away from Watsonians 2s – Helen McNaught grabbing the away side’s goal. The L5s in Women’s West District Division Two, like the M4s, were minutes from seeing out a win from Alex Campbell’s goal before Ferguslie 1s scored to draw level. In Women’s West District Division One, the L4s hammered Hillhead 3s 6-0 at Jordanhill School. A hattrick from Cath Stirling and a goal each from Shona McConnell, Ann Menzies and Zoey Monaghan gave Marg Taylor’s side all three points.