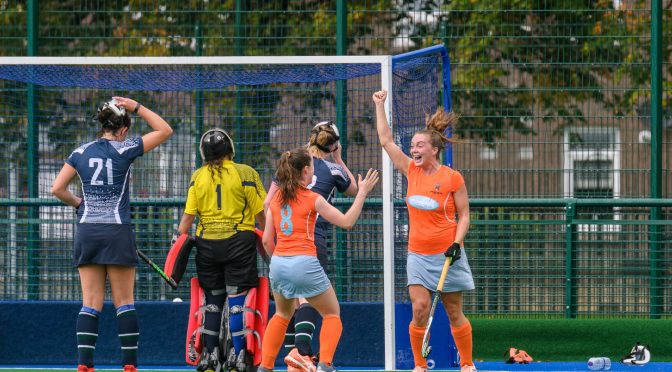 Clydesdale Western 1st XI sealed their first win of the season after comfortably beating GHK at Old Anniesland on Saturday.

The L1s drew their opening match of the season against Wildcats last weekend after conceding a late equaliser.  But the girls were at their clinical best on Saturday after converting from three penalty corners.  The first two goals came from Jen Eadie and Julie Lonergan, but the move of the game was displayed in the third goal from Heather Howie in the second half.  A corner was slipped right from the top of the circle in which Howie deflected high in to the net for her second goal of the season.

For all of GHK’s efforts, they were rewarded with a goal when one of their players created space in the ‘Dale Western circle before unleashing a reverse stick shot into the top corner.  But the L1s saw the game comfortably out to register their first three points of the Women’s National Division One campaign.

Clydesdale Men’s 1s and Hillhead 1s cancelled each other out on the opening day of the Men’s National Division One season at Old Anniesland on Saturday.

In what was a slightly inconsistent start from both teams, it was Clydesdale who eventually settled first and had more of the possession.  Hillhead, however, produced the games first clear cut chance, but was comfortably saved by ‘Dale debutant Jack Rathbone.  The away side then created their own chances, which saw Struan Walker and Chris McFadden denied by Hillhead ‘keeper Jamie Frail.  David Nairn did beat Frail following a good move involving Andy McAllan and Ewan Fraser but deflected off the post as both sides went in goalless at half time.

It didn’t stay goalless for long, however, when five minutes in to the second period Clydesdale opened the scoring.  Defender Andrew Allan from a right back position in the final quarter of the pitch swept a ball in for Sam Hayes to score via an upright reverse deflection.  Hillhead pushed forward in a bid to score an equaliser, whilst the M1s had a number of counter attacking opportunities but sadly were not able to convert.  ‘Dale also missed out on a second goal through a penalty corner which was inches away from being touched in by ‘Dale captain Gordon Amour sliding in at the back post.  The home side scored an equaliser ten minutes from time, when two Hillhead forwards combined passes around Rathbone before slotting home to level at 1-1.  Rathbone then made a crucial save two minutes from time as both teams settled for a point in their season’s opener.

In the rest of the weekend’s games, all three of the other Men’s games ended in defeats.  The M3s, against Uddingston 2s, lost 4-0.  A young M4s side, despite a positive performance lost at home by a single goal.  Youngster Andrew Cox grabbed his first senior goal for ‘Dale’s M5s but lost 3-1 to Helensburgh 3s at home also.  In stark contrast to the Men’s, all three of the other Clydesdale Western games ended in wins – the most remarkable win coming from the L6s who fought back from 3-0 down at half time against GHK 4s to win 4-3.  Goals from Anna Winter, Charlotte Martin, Sophie Robinson and Emma Murray capped off a stirring fight to secure the L6s first win of the season.  Helen McNaught scored a hattrick in the L3s 4-1 win away to Haddingston, with Susie Gillman scoring the other goal.  The L5s notched up their first win of the season securing a 2-1 win away to Giffnock 1s on Sunday – Aaliyah Sandhu and Iona Denholm being the L5s scorers.

Once again, great effort from all our teams who played their first games of the season.  Games are coming thick and fast, so do your best to available for your respective teams in the coming weeks!