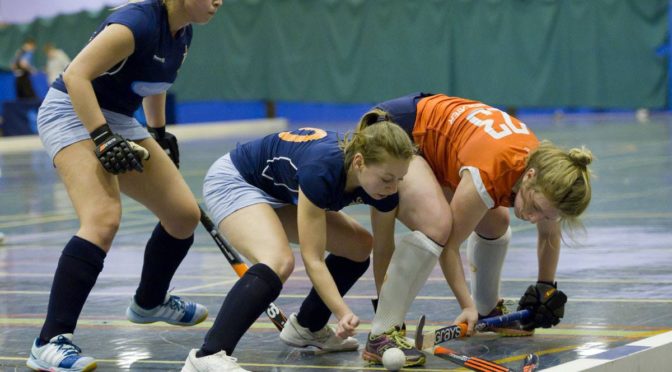 Clydesdale Men’s 1s hopes of reaching the Semi Finals of Men’s National Indoor Division One Grand Play-Offs are all but over despite securing their league status for next season on Saturday at Bell’s Sports Centre, Perth.

With so much to play for, the M1s had the opportunity to effectively secure their stay in MNIL 1 for next season in their first crossover match.  A win against Kelburne would have given them a six point advantage as well as a superior goal difference over their opponents with two crossover games remaining.  And they duly succeeded with an 8-6 win in the contest.  This was despite being 3-2 down at half time, as the ‘Dale scored six times in the second half to seal the three points.  Struan Walker was at his devastating best after he notched a hat-trick in the match.

Clydesdale needed to secure another win, this time against Grange to put themselves in second place of their crossover group.  But the M1s lost 6-4 to the Edinburgh side, despite goals twice coming from Walker and a single goal each for Chris McFadden and Dean Baber.  Grange have now opened a three point lead in second place, with Clydesdale’s only hopes of securing second place being a win against Grove Menzieshill coupled with a Kelburne win over Grange.

The L6s were powerless to stop the west end side in their win despite goals for ‘Dale Western 6s coming from Rachel Brown and Claire McKaig.  The L6s remain bottom of WWD 3 having suffered their sixth defeat in a row this season.

Clydesdale Western 1s booked a place in the Women’s Grand Indoor Play-Off Final after a tense running penalties victory over Watsonians at Bell’s on Sunday.

The L1s were 1-0 up in the Semi Final through Kayleigh Justice, but the Edinburgh side hit back with two goals.  ‘Dale Western equalised through Justice again and that was how the contest finished after 40 minutes.  The running penalties were deadlocked at 1-1 going into sudden death, with Margery Justice scoring the L1s goal.  And she was to be the hero of the day when she converted her sudden death attempt to put Clydesdale Western through to the Final at Watsonians expense.

‘Dale Western will face Dundee Wanderers in the Play-Off Final of Women’s National Indoor Division One on Saturday 2nd February as part of Scottish Hockey’s Indoor Gala Day at Bell’s.

Earlier in the day, the L1s completed their crossover games by beating CALA Edinburgh 5-1.

The L2s went down 4-1 and 6-2 to Inverleith and Granite City Wanderers respectively.  The results mean the L2s drop to third in their crossover group.  Their hopes of reaching the Semi-Finals of the Promotion Play-Offs are still intact – this will require a win against Kelburne alongside an Inverleith win against Granite City Wanderers next Sunday.  ‘Dale Western 2s can not promote from WNIL 2, however, as the league they are in is as high as they are allowed to play in.

Clydesdale Western 5s missed out on the chance to go second in Women’s West District Division Two after defeat to Kelburne 3s at Glasgow Green.

The L5s were heading into the game on the back of three straight wins and five from their last seven league games.  But they were helpless in stopping their Paisley opponents scoring two unanswered goals as they left Glasgow National Hockey Centre emptied handed.

The result leaves ‘Dale Western 5s two points off second place, but having played a game or two extra than their opponents around them.

Well done again to Clydesdale Western 1st XI for securing a place in the Grand Indoor Play-Off Final.  Quick mention as well to Craig Bradley, Russell Bradley and Karl Richmond for their efforts on Saturday. The 3s, 4s and 5s captains organised an inter-club round robin tournament for over 40 players last Saturday. Excellent hockey was played by all which saw many stay behind after for drinks and pizza – well done!