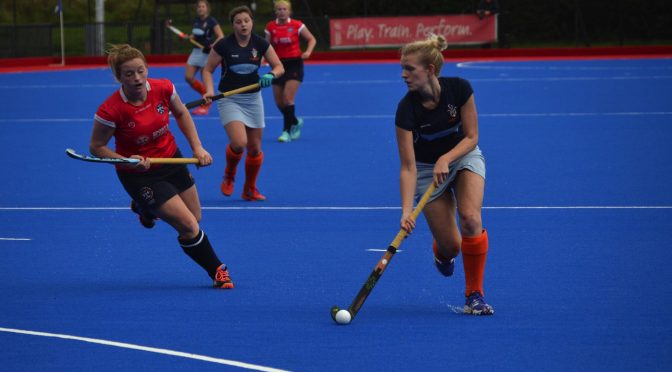 Clydesdale Western 1st XI kept up the pace at the top end of Women’s National Division One with an emphatic nine goal win over bottom side Kelburne at Glasgow Green.

Alexandra Wilson scored a hat-trick whilst Jen Eadie and Lexi Sabatelli both grabbed two goals each.  Millie Steiger and Martha Lawson were ‘Dale Western’s other goalscorers.  The result keeps the L1s in 3rd spot, four points off league leaders Edinburgh University and one point away from 2nd placed Grove Menzieshill.

Clydesdale Men’s 1st XI were narrowly beaten by champions Kelburne at Glasgow Green despite an encouraging display of hockey.

Despite being 1-0 down in the first half, ‘Dale were very much in the game and unfortunate not have found an equaliser.  The second goal of the game went to the home side, but the M1s foraged a goal back through captain Patrick Lonergan.  However, that was all there was to be as Kelburne held on for a vital three points in their bid to be champions of Men’s National Division One again.  For Clydesdale, results elsewhere now sees them drop to 9th in the league, three points away from 6th placed Dundee Wanderers and seven points clear of bottom side Inverleith.

In the rest of last weekend’s busy outdoor schedule, the M2s lost 4-2 to Grove Menzieshill 2s at Forthbank after a poor first half display.  The M2s were 3-0 down at half time, but second half goals from Euan Lindsay and veteran Colin Moulson gave the visitors a fighting chance to steal a point.  However, the M2s could not find an equaliser and in the dying seconds, Menzieshill scored a fourth to take the points.  The result means the M2s are now 3rd in Regional Division One, two points behind league leaders Hillhead.  The L2s had little difficulty in their game as they beat CALA Edinburgh 2s 8-0 at Titwood.  Braces from Christy MacKinnon and Sarah McHugh keeps the L2s in 2nd place in the Championship Division One table, three points off Edinburgh University 2s with two games in hand.  Anna Hoolaghan, Abi Harrowell, Lesley Cosh and Margery Justice were the L2s other scorers.

The M3s completed an enthralling late comeback against West District Division One table toppers, Uddingston 3s at Titwood.  Despite being 3-1 down with 15 minutes to go, the M3s stepped up to score four goals.  Uddy did score a fourth soon after but it ended up only being a consolation.  The M3s scorers were Conor Oliver, David Christie, Ali Bleach, Ian King and Andrew Couper and are now three points behind Uddingston in the league table.  The L3s lost narrowly to Waverley Inveresk Trinity at Edinburgh Academy Playing Fields.  The result means the L3s have lost further ground in their attempts to overtake Edinburgh University 3s in 3rd place in the Championship Division One table.

The M4s kept up their lead at the top of Men’s West District Division Three, despite drawing 2-2 with Greenock Morton 2s at Largs.  The goalscorers were Russell Bradley and Ben Mitchell.  The L4s are now remarkably up to 4th in Women’s West District Division One after a 2-1 win over Glasgow University 2s at Titwood.  Gill Green and Ann Menzies were the scorers to give the L4s their eighth win in ten league games after seemingly looking like being in relegation trouble.

A young M5s side went down 3-0 to Giffnock 3s at Titwood.  The L5s and L6s played back to back games over the weekend.  The L5s beat Dumfries 2s thanks to the game’s only goal from Olivia Capaldi.  On Sunday, the L5s were held to a goalless draw away to Irvine 1s.  The L6s drew 2-2 with Arran 1s – goals coming from Rosalind Murray and Anais Bonner – but lost 3-2 to Stepps 2s on Sunday with goals from Emma Neary and Zoe Monaghan.  The M5s remain bottom of Men’s West District Division Four, whilst the L5s hopes of promotion from Women’s West District Division Three remain high sitting 2nd, five points clear of 3rd placed GHK 3s.  Despite losing on Sunday, the L6s point against Arran 1s, now means they are 9th in Division Three – a point clear of Ayr and Irvine 1s.

Well done to all of our teams for their results and efforts!