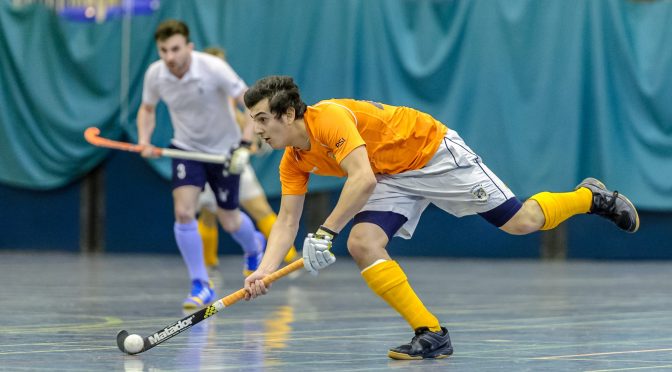 Clydesdale Men’s 1s bounced back from a testing start to Men’s National Indoor Division One for the season by taking four out of a possible six points in their two games at DISC last Saturday.

The M1s had only picked up three points, but had lost four from their first five games going into their clashes with Dundee Wanderers 1s and Dunfermline Carnegie 1s.  The boys duly responded with a hard fought display against Wanderers to take a point in a 3-3 draw.  But the Titwood side were ultimately left thinking what could have been after fighting back from a 2-0 deficit to lead 3-2 until the final minute of the contest.  Goals from Struan Walker, Chris McFadden and Gordon Amour looked set to give ‘Dale all three points until Wanderers equalised in a barnstorming finish which could have seen both sides win the contest after the sixth goal of the match.

The second game of the day was more conclusive when the M1s beat Dunfermline Carnegie 1s 7-4.  Walker scored two as did Ciaran Crawford, whilst there was a goal each from McFadden, Dean Baber and David Nairn.  The results mean Clydesdale finished fifth in MNIL 1 after the first round of games going into the crossover groups.  The opposition for the crossover groups are to be confirmed in due course.

Clydesdale Men’s 2s hopes of promoting from Men’s Regional Indoor Division One are all but over after falling to a defeat in the first of two games last Saturday at Forthbank.

The M2s going into last Saturday’s games realistically needed to win all of their games up to the end of the season in order to promote.  But the boys fell to a 3-0 defeat against Uddingston 2s in their first game on Saturday.  The M2s did recover, however, by claiming a narrow 10-9 win over Dunfermline Carnegie 2s.  All the more impressive given the M2s have played the whole indoor season without a goalkeeper.

‘Dale 2s now have one more weekend to finish the season on the 26th January with a triple header against Grange 2s, Western Wildcats 2s and Hillhead 2s.

Clydesdale Western 5s jumped up to third in Women’s West District Division Two following their 5-2 home win against Giffnock 1s at Titwood.  The L5s fell behind to a Giffnock penalty corner, but a fantastic team peformance saw Trish Lonergan’s side comeback in style.  Emma Murray – arguably the player of the match – got the L5s back on level terms after smashing in an equaliser from a counter attack to bring the home team level at half time.  From then on ‘Dale Western 5s took over in a near one sided second period which saw goals from various combinations.  Youngster Rachel Brown assisted another youngster in Zoe Monaghan who gave the L5s a 2-1 lead, before Annie Lonergan tucked home a third.  Annie Lonergan was involved in goal four after exchanging passes with Lauren Halley, which saw the latter sweep in to make it 4-1.  Katrina Meikle then placed a fifth to seal the win even despite Giffnock scoring a second goal a few minutes from time.

Clydesdale Men’s 5s battled to a point in their re-arranged fixture away to Dumfries 2s.  Despite having no goalkeeper, the M5s kept the home side at bay for the full 70 minutes but could not forage a goal as both sides played out a 0-0 draw.  The M5s remain tenth in Men’s West District Division Three on ten points.

The L1s went into a group featuring Grove Menzieshill 1s, Edinburgh University 1s and CALA Edinburgh 1s knowing two wins in their first two games would have clinched a final four place.  And they did not disappoint as they put Menzieshill 1s to the sword with a 6-2 victory.  Kayleigh Justice was in goalscoring form, collecting four to her name whilst sister Margery and Millie Steiger scored a goal each.

The L1s then fought back from a goal down to Edinburgh University 1s to win 4-2.  Margery Justice got a goal again as did Laura Mann and Susie Gillman in the first half.  Steiger made sure of the win in the second half, despite ‘Dale Western conceding a second.

Clydesdale Western will play CALA Edinburgh 1s in their final crossover game before contesting the Semi-Final – opposition to be confirmed in due course.

Clydesdale Western 2s had a mixed day in their triple bill in Women’s National Indoor Division Two at DISC.

The L2s started well, securing a 3-1 win against Bon Accord 1s to give them their third win in the league.  But they matched that number in defeats as ‘Dale Western 2s lost their next two games on the day.  The girls went down 6-3 to Dundee Wanderers 2s before suffering an 8-1 loss to Inverleith 1s.  The L2s are now fourth in WNIL 2 with ten points.

The L6s were unable to stop a powerful attacking performance from a GU side pushing for promotion to Division Two.  The L6s conceded eight goals but got one in consolation through Anne Sturgess.  Results around the L6s have also gone against them, leaving them four points adrift of safety from relegation.