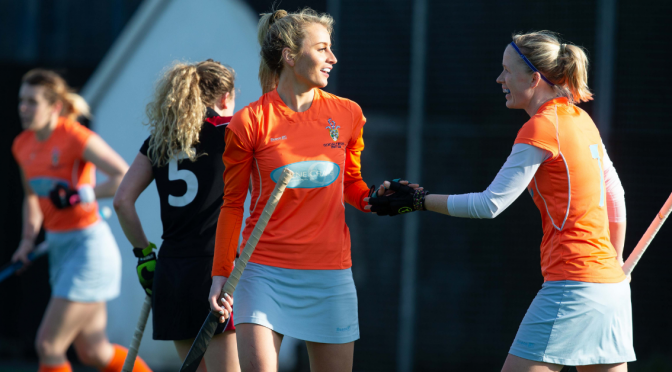 Clydesdale Western maintained their lead in the Women’s Premiership title race with an away win at Western Wildcats 1s before booking a place in the next round of the Women’s Scottish Cup after beating Dundee Wanderers 1s at Titwood the following day.

The L1s saw off Wildcats 3-0 on Saturday and Wanderers 7-0 on Sunday to restart their outdoor season in similar vain to the first half of their domestic campaign. ‘Dale Western remain top of the Women’s Premiership on goal difference whilst having a game in hand and are also in the Quarter Finals of the Cup, where they will take on Hillhead 1s this coming Sunday.

Head Coach Derek Forsyth was missing a few of his mainstay including Bronwyn Shields due to injury. This was also the first competitive outdoor game without Jenny Eadie following her transfer to Wimbledon. Forsyth handed debuts to both Georgia Coyle and Emma Webster on Saturday at Auchenhowie, who both slotted in seamlessly. Clydesdale Western started well against Western, but were arguably guilty of missing some great chances. But the second quarter was when the Titwood girls eventually got their deserved goal. Emma McGregor converted at the back post from skipper Frances Lonergan’s penalty corner pass. One became two before half time following good play from Karin Belch and Millie Steiger which eventually led to Holly Steiger sweeping in a first time shot. The home side did come out stronger in the second half to force a goal back, but the L1s defended astutely in a bid to register a tenth clean sheet of the league season. And by the fourth quarter, the away side effectively ended the contest as a whole when McGregor’s driving run found Heather O’Brien, who controlled a bouncing ball impressively with a smart back post finish.

In Sunday’s cup tie at Titwood, Coyle was a notable inclusion again, keeping her place after an impressive league debut. The home side were denied by the post in the first quarter as a Wanderers side, two short of a full pitch compliment, held out. Eventually the Tayside’s resistance was broken when sharp skills from Emma Murray finished with a pass for Fiona Semple to slot home. Semple doubled her own and her team’s tally from a penalty corner exchange with Belch. O’Brien was then at the heart of ‘Dale Western’s third goal after rounding the ‘keeper to set up McGregor, whose final shot was eventually put over the line by Holly Steiger. In the second half, Millie Steiger layed a pass on for Annabel Ballantyne, who showed great composure to round Wanderers number one and score. The final quarter brought three more goals to make the scoreline more emphatic. Semple registered a hat-trick, albeit fortuitously, when her attempted pass was deflected in by an away side’s defender. Murray deflected McGregor’s shot from the top of the circle before Holly Steiger deflected in her second of the day.

Clydesdale put in an admirable fight against Grange 1s in the Men’s Premiership at Titwood on Saturday – but sadly were on the receiving end of a one-goal defeat.

Missing some key figures including Head Coach Ciaran Crawford and captain Andrew Allan, the M1s battledcommendably against their league chasing opponents. The Edinburgh side scored three goals before David Nairn and Euan Anderson set up a tense, but eventually unsuccessful attempt to claw back a point. Despite the loss, the performance was extremely encouraging and this was highlighted by a superb display from youngster Jack Nairn – who follows in the footsteps of older brothers James and David to have made his debut for the Men’s 1st XI on Saturday.

Clydesdale nearly got off to the best of starts, but forward Jack McKenzie’s snap shot in the opening minute went wide. The second quarter was when the deadlock was broken. A Grange forward’s shot proved too hot to handle for goalkeeper Sean Mahoney, who could only parry the ball to a grateful forward waiting for the simplest tap in. The home side responded well to the setback and were very unfortunate not to have equalised. David Nairn did have the ball in the back of the Grange net, but play was halted just before Nairn’s surging run for a foul that led to an eventually unsuccessful penalty corner and a card for Grange. Chances followed soon after for Gregor Hirst and David Clark but the Titwood boys were denied all the way to half time.

The Edinburgh side took advantage of the M1s inability to convert their chances when a long corner and pass led to a deft touch from a Grange forward making it 2-0. David Nairn was the victim of a second disallowed goal due to an infringement during a Clydesdale penalty corner. The away side then looked to finish the game as contest quickly with applied pressure that brought out the best from goalkeeper Calum Douglas, who produced a stunning stick save to keep the deficit at two. Quarter three came and went, but it was the fourth quarter when Grange effectively wrapped up the three points. A baseline drive down the right ended with a forward tucking a loose ball away.

But the home side rallied hard in the final six minutes starting as David Nairn finally got on the scoresheet at the third time of asking, tapping in an uncontested ball from a ‘Dale penalty corner. Anderson scored his first goal for the 1st XI when he applied the finishing touch from a counter attack. Sadly, that was the final major moment of the match as Grange held on to take the win.

There was only one win from the remaining seven games that took place over the weekend for Clydesdale & Clydesdale Western sides.

The M3s bounced back from a 5-0 defeat at Auchenhowie on Saturday by beating Glasgow University 3s at Garscube on Sunday in Men’s West District Division One. Craig Bradley’s side did have to come from a goal down against GU 3s, but Mitchell Pritchard’s fierce slap levelled the scoreline before Jeetinder Berman tapped in a winner six minutes from time.

Sadly, it was five defeats for Clydesdale Western sides who all experienced a depletion of players over the weekend. The L2s lost 3-1 to Watsonians 2s at Tipperlinn in the top half of the Women’s Championship A Division. Louise Redpath scored to make it 2-1, but a 10-player L2s side eventually succumbed to a third goal at the death. The L3s in the lower half of the A Division went down 4-1 at home to Hillhead 2s – Ruby Mason scoring for the home side.

In the Women’s West District Leagues, the L4s and L5s suffered respective 5-0 losses at home. The L4s were beaten by Glasgow Accies 1s in Division One, whilst Giffnock 1s put the L5s to the sword in Division Two. The L6s, in Division Three, narrowly lost 2-0 to Greenock Morton 1s at Hutchesons’ Grammar School.