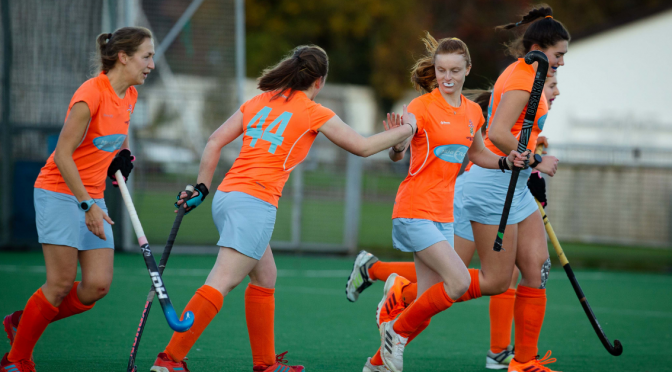 Clydesdale Western 1s broke a stubborn GHK 1s resistance late on to keep up their perfect start to the Women’s Premiership season at Old Anniesland on Saturday.

Fourth quarter goals from Emma McGregor and Jen Eadie were enough to give Derek Forsyth’s side all three points to move up to third in the league table as well as recording a fifth win from five games in the process.

There were no major absences to the L1s squad going into the game on Saturday, as Jen Eadie, Bronwyn Shields and Millie Steiger made returns following last week’s World Cup qualifying campaign for Scotland Women, which sadly ended in disappointment.

Focusing on the Premiership match up, the contest with GHK became largely one sided as the away side went on to dominate huge portions of the game up till the fourth quarter. The main reason for the deadlock being the west end side’s goalkeeper, who was at the top of her game on Saturday with a string of superb saves.

Forsyth’s team were not be denied though as midway through the final quarter McGregor produced a little bit of magic to beat a couple of GHK defenders in the right hand corner before scoring with a reverse stick shot. And Eadie sealed the points minutes from a penalty corner to end GHK’s challenge of a comeback.

Two goals from David Nairn were not enough to give ‘Dale a third win in a row and instead suffered their third defeat of the season after seven league games. The result means Ciaran Crawford’s side drop to fifth in the league table.

Clydesdale got off to a poor start by their standards, conceding from a counter attack that began from a scoop deep inside Dunfermline’s half in the first quarter. But the visitors replied quickly when David Nairn was found from a deep pass of Clydesdale’s own before slotting home with a composed finish.

After a second quarter of no major note, the home side hit Clydesdale with two goals after half time to put the Titwood side well and truly up against it. And despite pulling a goal back when Nairn’s attempted pass was inadvertently deflected in by a Carnegie defender, the M1s were unable to find an equaliser to cap off a disappointing afternoon.

A third of the remaining nine games ended in wins for Clydesdale & Clydesdale Western teams.

The L2s kept up in their bid to challenge for the Women’s Championship title with a narrow 2-1 win over Hillhead 2s at Titwood. A goal each from Rosie Tudor and Louise Redpath helped Donald Amour’s side to three points, keeping the L2s second in the league table. Meanwhile in Women’s West District Division Two, the L5s secured an excellent 1-0 win away to Giffnock 1s – Emma Gilmour providing the match winner. The only win of the remaining men’s games belonged to the M3s, who ended Rottenrow’s 100% start to the season in Men’s West District Division One. Despite falling behind early on, Ewan Fraser stepped up his remarkable return by equalizing on the half time buzzer from a drag flick corner. Jeetinder Berman added two close range finishes in the second half to give Craig Bradley’s side all three points.

Returning to the Women’s Championship, the L3s run of losses extended to eight league games, going down 3-0 to Waverley Inveresk Trinity at Edinburgh Academy. The M2s hopes of dethroning Edinburgh University 2s at the top of the Men’s Regional Division ended in defeat. Despite a brave effort from a young M2s squad, the student side won 3-0 at Peffermill. Guy Hogan scored the M4s only goal as they were beaten 6-1 away to Giffnock 1s in Men’s West District Two, whilst the M5s, in Men’s West District Division Three, lost 5-1 to Uddingston at Titwood – Michael Cox scoring his first ever senior goal for Clydesdale.

In the same division, M5s Development had a day to forget after being thrashed 15-0 at home to Western Wildcats 4s. The L6s will have felt in similar vain following a 9-1 loss to Greenock Morton 1s in Women’s West District Division Three. Melanie Ovens providing the merest of consolation goals.