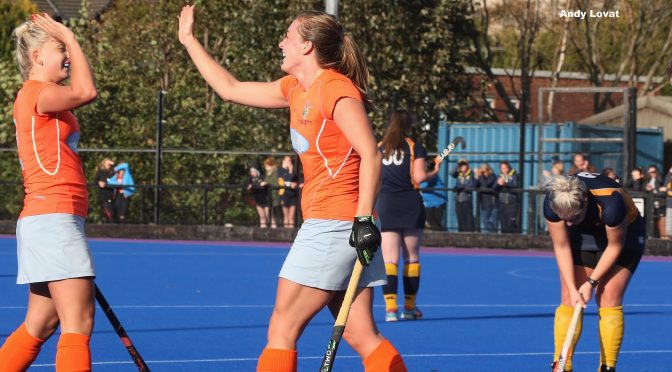 Although ‘Dale Western started and finished the first half in the ascendancy, it looked as though Hillhead’s hardworking defensive rearguard would see it finish goalless after 35 minutes. But Emma McGregor popped up to score her fourth goal of the season and give the away side a lead going into the break.

The late first half goal sparked an even more positive reaction from the L1s who then doubled their lead not long into the second period through Millie Steiger.  Lexi Sabatelli and Heather Howie scored a goal each to further stretch Clydesdale Western’s lead before eventually taking all three points.

The result, coupled with other favourable scorelines, sees Clydesdale Western top of Women’s National Division One after four games – taking ten out of a possible twelve points already.

For more photos of the game, please visit Ad-Hocksports by clicking here.

Clydesdale Western 2s registered their first win of the season after seeing off Watsonians 2s in a entertaining game at Hutchesons Grammar School.

The L2’s took the lead through an excellent individual goal from Naomi Harkness.  Lucy Arnold followed to put the L2’s 2-0 up at half time.  The team had a difficult start to the second half, with Watsonians scoring twice within five minutes.

The L2’s fought back and had the better remainder of the game, delivering what was a merited winning goal. An excellent assist from Annie Lonergan, allowed Martha Lawson to finish the game with a powerful reverse hit.

Clydesdale Western 3s fell to their first defeat of the season after losing out to Waverley Inveresk Trinity 1s in Edinburgh.

Despite having the better of the first half, the L3s went 1-0 down at half time after Waverley executed a swift counter attack.

The second half got even better for the home side who grew as the game went on.  Despite Gill Green scoring her sixth goal of the season, Waverley scored another two their tally to run out 3-1 winners.