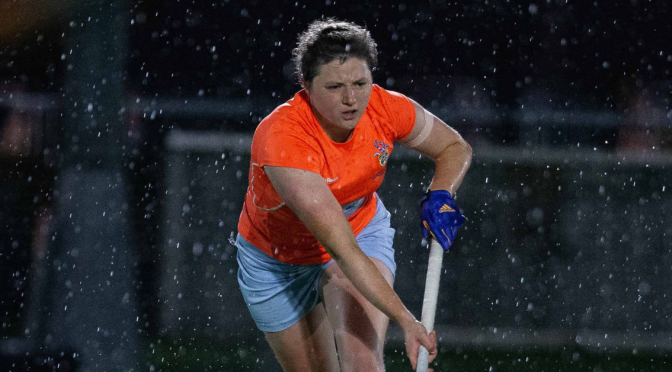 Clydesdale Western 1s hit top spot in the Women’s Premiership for the first time this season after a second successive double figure win against Erskine Stewart’s Melville 1s on Thursday night at Titwood.

The L1s carried on from their impressive goal haul over the weekend by recording an 11-0 win on Thursday night from one of two games in hand. Jenny Eadie scored four of the eleven whilst Heather Lang and Emma McGregor chipped in two each. Fiona Semple and Holly Steiger also got a goal apiece as did Paz Medina San Martin who registered her first ever goal since becoming a Clydesdale Western member during the summer.

The big win sees Derek Forsyth’s side rise to the summit of the Women’s Premiership with only two games remaining before the league splits. Both of those games will take place this weekend at home to Hillhead 1s on Saturday and Dundee Wanderers 1s on Sunday.

Going into Thursday’s night contest with bottom side ESM, Forsyth was most notably without Karin Belch and Lexi Sabatelli, but Emma McGregor made a welcome return following a brief period of unavailability. If the aim of the game was to carry on from Sunday’s phenomenal 17-0 win, ‘Dale Western certainly did not waste much time trying to achieve this when Semple scored the game’s opening goal after a couple of minutes. Eadie grabbed the first of four moments later to double the home side’s advantage. San Martin then slipped a shot under the goalkeeper for three before Eadie struck a powerful shot for four inside the first quarter.

In the second quarter, it was more of the same from the Titwood girls. Relentless pressure on the Edinburgh side brought goals five and six through McGregor and a corner from Eadie respectively.

If there were any hopes of surpassing Sunday’s scoreline, the away side’s defence and goalkeeper showed tremendous fight with a string of blocks and saves to deny Clydesdale Western extending their six goal lead in the whole of quarter three. But the L1s found their goalscoring touch from the first half with five more goals in the final quarter. Eadie notched up her hat-trick before adding another to make it 8-0. Two sweeping team moves brought a goal each for Holly Steiger and Lang. McGregor completed the scoring a couple of minutes shy of half time with her second goal from close range.