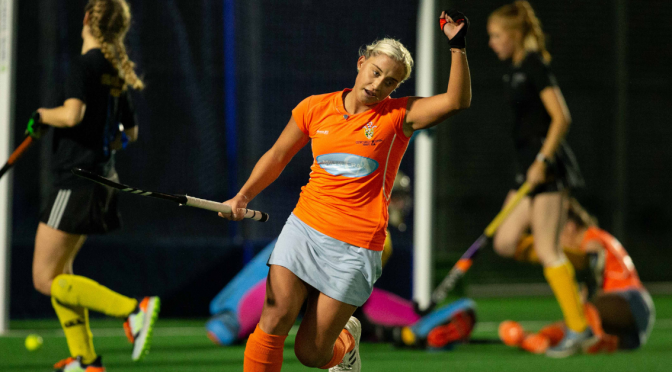 Clydesdale Western 1s produced their most clinical display so far this season after putting seven past Glasgow University 1s in the Women’s Premiership at Titwood on Saturday.

Two goals each from Lexi Sabatelli and Holly Steiger as well as single goals from Heather Lang, Fiona Semple and Millie Steiger gave Derek Forsyth’s side a sixth straight win in the league. The Titwood girls sit third in the league table on the same points as first and second place whilst also having a game in hand.

Forward Paz Medina San Martin was the main notable absentee to an otherwise undisrupted L1s team sheet. Thankfully, it was no such issue from an attacking viewpoint when Sabatelli reversed in to open the scoring midway through a controlled first half display by ‘Dale Western. The home side doubled their lead when Heather Lang collected a pass on the edge of the circle before sending a quick snap shot past GU’s goalkeeper.

The second half produced more consistent pressure by Clydesdale Western on the student’s side goal which brought a flurry of close range finishes which began through Semple. Holly Steiger then added two goals either side of Sabatelli’s second goal. The scoring was completed when Millie Steiger’s shot deflected in off a defender.

That final goal capped off a fine day for Millie Steiger who, along with Jenny Eadie, produced fantastic performances at the heart of Clydesdale Western’s midfield. As well as those notable showings, a fifth league clean sheet will have also no doubt pleased Forsyth going into the final weeks of the first half of the season.

Jack McKenzie’s first ever goal for Clydesdale 1s was sadly not enough to stop Watsonians 1s coming back from a goal down and put a major dent in the Titwood side’s hopes of a top six split finish in the Men’s Premiership.

The M1s took a half time lead courtesy of McKenzie but the Myreside opponents hit twice in the second half to leave Ciaran Crawford’s team remaining on twelve points after eight games. Clydesdale sit seventh in the Men’s Premiership going into next weekend’s double header with fellow top half hopefuls Uddingston 1s and league chasing Grange 1s.

‘Dale welcomed back captain Andrew Allan to the selected squad after a lengthy layout due to injury. The first quarter was quite open, as both teams exchanged chances without breaking the deadlock. But that changed by the second quarter when Allan’s scoop over the top was the start to a pattern of play that finished with McKenzie opening the scoring.

The game then flipped within minutes of the second half restart as Watsonians equalised when a forward was left unmarked in the circle. The visitors then made it two when a circle scramble fell to a Watsons’ forward who slotted home. And despite a surge from the home side which culminated in chances from open play as well as corners, the Edinburgh side were not to be breached to claim all three points.

The M5s Development recorded their first win of the season in Men’s West District Division Three.

Away to Hillhead 6s, goals from Gavin Bryson, Iain Flynn and Myles Macaulay gave the M5s Development a huge 3-2 victory.

The M2s returned to winning ways in the Men’s Regional Division as a brace from Adam Docherty was enough to beat Erskine Stewart’s Melville 2s 2-1 at Titwood. At the same time over the road at HGS, the M3s found their goalscoring touch with a 9-2 win against Ayr 1s in Men’s West District Division One. The goalscorers for the M3s were spread out with two goals each from Colin Moulson and Jack Cassie whilst there was a goal each for Robin Ferguson, Mitchell Pritchard, Asif Ali, Foster Harrowell and Jeetinder Berman.

The L2s hopes of challenging Edinburgh University 2s in the Women’s Championship Division took a big blow after losing 1-0 at Titwood to the student side’s 3rd XI.