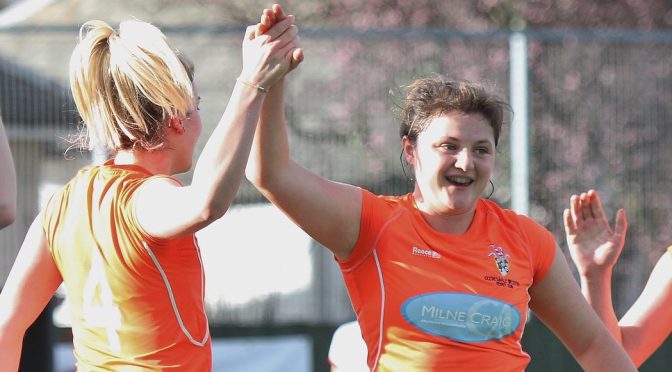 Clydesdale Western 1s extended their goal difference lead at the top of the Women’s Premiership by scoring another eight goals – this time at Titwood against rock bottom Gordonians 1s on Saturday.

A double from club top goalscorer Jen Eadie and Emma McGregor were responsible for half of the goals for Derek Forsyth’s side. Julie Lonergan, Bronwyn Shields, Millie Steiger and Naomi Harkness also chipped in with a goal to keep their side on top spot in the Women’s Premiership table. Their 8-0 win – their second in a row – gives them a five goal margin ahead of Edinburgh University 1s, who won 7-0 against Hillhead 1s. Fellow title challengers Watsonians 1s and Dundee Wanderers 1s drew 1-1 against each other, whilst Western Wildcats 1s drew 2-2 with Glasgow University 1s.

Going into the game, Forsyth was without Lexi Sabatelli, but otherwise had a full squad to call on. On paper, Clydesdale Western arguably would have been expected to beat a Gordonians side that have yet to register a point in their inaugural season in the top division. And the script was not to be changed as the home side raced into a 4-0 lead by the end of the first quarter. Shields got the scoring started with a strike from open play, before Eadie made it two from a penalty corner. McGregor and Harkness then linked up for goal three, with the latter converting. McGregor was to add to her assist with a solo run that ended with her scoring her first goal of the campaign.

The second quarter was not too dissimilar in terms of play, but the 4-0 scoreline remained up to half time. Quarter three was when the goals recommenced for the Titwood girls, with Eadie getting her second from another set piece. McGregor then got her second of the game from a short corner and Julie Lonergan did likewise to make it seven. The final quarter saw Steiger compose herself to place a finish following good build up down the right hand side.

Clydesdale 1s hopes of a top four finish in the Men’s Premiership took a major dent after drawing at Dalnacraig against lowly Dundee Wanderers 1s on Saturday.

Andy McAllan’s equaliser in the third quarter gave Ciaran Crawford’s side a share of the points when it looked like – towards the end in particular – they would go home empty handed such was the panicky finish to the contest. The M1s remain 5th in the Men’s Premiership table behind Edinburgh University 1s who beat Uddingston 1s 3-0 on the same day. However, 3rd placed Western Wildcats 1s lost 4-2 to Hillhead 1s to potentially open another spot in the top four race – Western and Uni are now both on 20 points, whilst ‘Dale and Uddy are six points further behind. Uddingston have played a game extra over their three rivals.

Clydesdale started the game well and had the better possession stats, but were caught on the break by Wanderers for the game’s opening goal. A free hit on the sideline inside the final 25 was eventually smashed into forward Bobby Ralph who deflected high past a helpless Fergus Barrows. ‘Dale responded well with a couple of chances of their own, but failed to capitalise.

In the second half, a high transfer from the M1s which saw the ball being played into the circle called McAllan into action to deflect in and level the scores. The Titwood boys were nearly in front soon after but Ben Galloway’s reversed shot flew over the bar. Ill discipline from both sides became a prominent feature towards the end, and it nearly cost the visitors who were caught on a couple of occasions leading to a notable goal-line save from Steven McKnight to help preserve a point.

The result of the weekend belonged to the M5s who took all three points away from Dumfries 2s in Men’s West District Division Three South.

On paper, Dumfries 2s were favourites given their high position in the league table and the M5s being bottom. And despite being 1-0 down, Iain Flynn scored twice to give his side the win at King George V Playing Fields.

The L4s were also victorious in Women’s West District Division One. Two goals from Zoe Monaghan and a goal each from Ann Menzies, Iona Denholm and Emma Murray gave their side a 5-3 away win against Uddingston 2s to keep themselves 3rd in the table.

Susie Allan struck a late leveller to give the L2s a share of the spoils against the L3s in Women’s Championship Division One. Rachel Whittle had given the L3s an early second half lead before Allan equalised for 1-1. The L2s remain 3rd, whilst the L3s are a position below via goal difference.

The M3s had to settle for a point too, playing out a 1-1 draw with Strathclyde University 2s. Mitchell Pritchard scored for Craig Bradley’s side, who almost won it at the end had Conor Oliver’s shot not crashed the post two minutes from time. The M3s remain 6th in Men’s West District Division One.

Sadly, it was defeats for the M2s, M4s and L5s. The M2s hopes of challenging for the title in Men’s Regional Division One took a major blow after an away 3-1 loss to Watsonians 2s. Despite, Colin Moulson deflecting in Neil Fulton’s eccentric pass in the opening minute, a penalty flick in the first half and two scrappy open play goals in the second half were Stuart Banford’s sides undoing. The M4s – despite a solid performance – were beaten 2-0 off a predictably strong Hillhead 4s side in Men’s West District Division Two. The L5s lost 3-1 at home to Glasgow Accies 2s in Women’s West District Division Two, with Helen Hood scoring for Trish Lonergan’s side.

Clydesdale Western 1s booked their place in the Semi Finals of the Women’s Scottish Plate with a thumping win at home to CALA Edinburgh 1s on Sunday.

Annabelle Ballantyne’s opening goal was the first of seven first half goals which effectively ended the contest – ‘Dale Western added two more in the second half. Amongst the goals was Emma McGregor who scored two more following her double from the previous day. Jen Eadie was also on the scoresheet, giving her 17 goals for the season.

The M2s and L4s also reached the Semi Finals of their respective knockout competitions with convincing wins on Sunday.

Michael Cockburn scored four in an 8-0 away win as the M2s progressed in the Scottish Men’s District Cup against Erskine Stewart’s Melville 2s. Jamie Green, Colin Moulson, Adam Docherty and Fraser Hirst grabbed a goal each for the cause.

The L4s reached the next round of the Scottish Women’s District Plate after a 4-0 away win against Livingston & West Lothian 1s. Georgia Schmolke, Ann Menzies, Wendy Justice and Ellen Murray all scored.

The Scottish Men’s Reserve Cup run for the M4s was ended with a 9-0 loss at home to an inevitably stronger Watsonians 3s team. On Monday night, the L5s lost 2-0 at home to Glasgow University 4s in Women’s West District Division Two action.