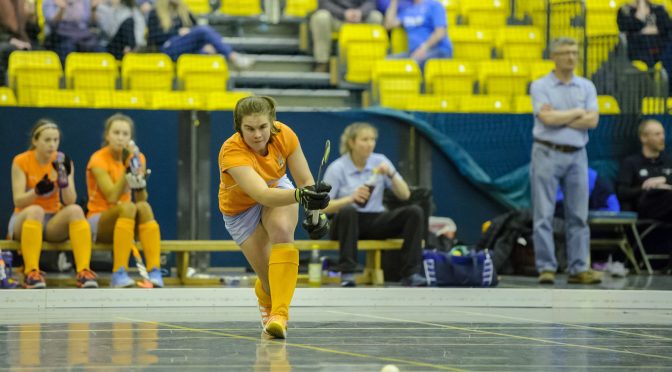 Clydesdale Western 1s booked their place in the Semi Finals of this season’s Women’s National Indoor Division One Play-Offs with two games to spare.

Going into their crossover Pool matches on Sunday at Bell’s Sports Centre, ‘Dale Western 1s required a win against Inverleith 1s followed by a Hillhead 1s draw or win against Grove Menzieshill 1s. The L1s successfully saw off Inverleith 1s with a 2-1 win. A goal each in the first half from Frances Lonergan and Bronwyn Shields gave Wendy Justice’s side a firm lead. The Edinburgh side did half the deficit but were unable to force an equaliser.

Qualification for the Semi Finals of the Women’s Indoor Play-Off were confirmed after Hillhead and Grove Menzieshill drew 1-1. The Titwood girls were made to come from behind in their final game of the day against Hillhead 1s. 2-1 down at the break, Holly Steiger and Margery Justice scored to add to Kayleigh Justice’s first half goal, giving the L1s another three points.

Clydesdale Western 1s have one more crossover game in Pool B against Grove before facing the runners-up of Pool A – which will either be Watsonians 1s or Edinburgh University 1s.

The L2s were beaten 8-4 by 2nd placed CALA Edinburgh, but recovered to beat Dundee Wanderers 2-1 in a closely fought contest.

A single goal from Catherine Clark was enough to give Trish Lonergan’s side a valuable three points in Women’s West District Division Two, taking them one place up to 8th in the league table.

The L5s started the game off very brightly, with excellent game play, pressure and goal opportunities aplenty – but sadly none were converted as shots and deflections were narrowly missed. Clark did have an earlier opportunity to score from a penalty corner strike but a great save from Stewarton Garnock’s post player prevented a ‘Dale Western 5s goal. The huge defensive effort from the home side was there to be seen for the entire first half, most notably from forward Helen Hood – which continued throughout the match.

In the second half, the game was all to play for as it continued to remain goalless. The away side came into the contest more with some much needed pressure on the L5s goal. But, Clydesdale Western 5s would be the ones to take the lead. An impressive half pitch burst break from Emma Murray paired with an equally rapid bolt from Clark allowed the latter to score the game’s opening goal. The last 15 minutes of the game was very much backs to the wall for the home side but they successfully saw out the final part of the game to seal a much needed win.

On Saturday, Clydesdale Western 6s came from three goals down to seal a point in a stunning comeback at Millerston against Strathclyde University 2s.

A goal each from captain Rachel Brewer, Layli Phillips and Alex Campbell was enough to give the L6s an excellent point in a game that looked finished after 30 minutes. The away side were 3-0 down, but rallied back in devastating fashion to seal a draw. The result gives ‘Dale Western 6s a much needed point in their fight to stay away from relegation in Women’s West District Division Three.

Consistent pressure and chance creation saw Strathy score three times in the space of seven minutes after being shut out for just over a quarter of the initial proceedings. But five minutes before the end of the first half, Brewer scored a drag flick penalty corner to reduce the deficit. The L6s were firmly back in the game minutes later. Brewer was at the heart of it again after her pass found Emma Gilmour breaking into the circle to square for Phillips who scored at the second time of asking.

The away side kept in the game, and deservedly scored an equaliser. Campbell combined with Lauren Edwards, and the former squeezed a push shot through the goalkeeper’s legs. The game could have gone either way, with both sides producing decent chances. There were hardworking performances from everyone in an orange shirt but Phillips along with defender Ava Walton put in notably terrific performances for Brewer’s side. The home side nearly won the game in the dying seconds, but a short corner strike brought an exceptional save tipped on to the post by L6s goalkeeper Isobel Green, who made a number of key saves during the match.

The L4s are without a win in three Women’s West District Division One matches following a 3-1 loss to Glasgow Accies 1s at Upper Windyedge on Saturday.

Marg Taylor scored the L4s only goal from a second phase of a penalty corner to cancel out Accies initial opener. But the home side regained the lead before half time, and doubled their lead in the second half.

The scoreline would remain right until the final whistle, which sees the L4s lose potentially more ground on league leaders Rottenrow 1s.

Three games were called off over the weekend due to frozen pitches.

The Men’s 4s on Saturday were cancelled at Linwood against Anchor. The L4s and L5s games on Sunday were also called off.