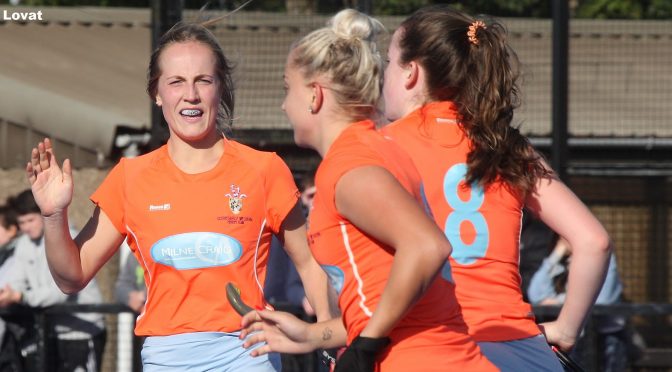 Clydesdale Western 1st XI moved up to second in Women’s National Division One following a late win against fellow league challengers, Western Wildcats Ladies 1s in a late pass back at Titwood.

In a very open game, the home side opened the scoring when Karin Belch brought down a lifted pass at the far post before dispatching with a flicked shot into the Wildcats net.  Wildcats responded, however, when a forward picked up the ball slightly left of centre before travelling into the circle and sending a shot past L1s ‘keeper Jessica Buchanan.

With the game swinging this way and that, both teams struggled to find the finishing touch until ten minutes from time.  Heather Howie’s reverse stick shot – her eighth goal of the season – regained ‘Dale Western’s advantage.  Despite a push from the visitors, the home side held firm to take all three points.

Clydesdale Western now move above Western Wildcats into second place in WNL 1, and sit three points off league leaders, Edinburgh University – ‘Dale Western and Uni face each other next Saturday.

Clydesdale Men’s 1s run of losses extended to four games after they narrowly lost to Western Wildcats Men’s 1s despite an encouraging performance at a rain soaked Titwood.

The visitors scored a goal in each half through Andrew McConnell and Matt McGinley but the home side will have felt extremely hard done by after creating a number of chances in both halves.

Wildcats goalkeeper, Gavin Sommerville made crucial saves from penalty corner routines by both Chris McFadden and Andrew Allan.  Sommerville was beaten, however, by forward Struan Walker but the youngster was denied with his shot in the second half crashing back off the left hand of post of the Wildcats goal.  Despite a professional approach right until the final whistle from Clydesdale, the visitors ensured it was ultimately another frustrating day at the office for the home side in a miserable day weather wise.

The result sees Clydesdale drop to 7th in Men’s National Division One, seven points away from a top four spot.

Heather Lang continued her return from long term injury to produce a two goal performance in a 5-0 win away to Waverley Inveresk Trinity 1s for the L2s.  Annabel Ballantyne, Rhona McGregor and Naomi Harkness scored the other goals as the L2s continue to rebuild their season in Women’s Championship Division One – they now sit in third place with two games in hand.  The L3s picked up a point in the same league away to league challengers, Uddingston 1s.  Rachel Whittle, like Lang, scored two goals in a 2-2 draw.  The L4s produced the same scoreline in their Women’s West District Division One clash at home to GHK 2s.  Goals from Anna Winter and Aaliyah Sandhu sees the L4s move up to fourth in the league.  The latest of wins came at Hermitage Academy when a Lauren Halley goal seconds from time in the L5s match against Loch Lomond 1s gave Trish Lonergan’s side a 3-2 win.  Halley added to her first goal in the match, whilst Emma Murray grabbed the other as the L5s sit comfortably in sixth place in Women’s West District Division Two.  The L6s lost 3-1 away to East Kilbride 2s – with Rachel Brewer scoring for the L6s.

The M2s, again, produced another superb performance of grit and determination when they hosted Men’s Regional Division One’s runaway leaders, Edinburgh University 2s.  But they were ultimately left wandering what could have been after losing 2-1.  Despite a competitive first half, Uni scored a penalty corner minutes before half time.  The second half saw the M2s have more possession and win more penalty corners but they were lacking in composure to score at the moment in time.  So much so, Uni capitalised on a ‘Dale corner to counter attack and score their second goal when a forward found space near the penalty spot to slot home.  Neil Fulton did convert a short corner minutes from time, but it was all too late as the M2s remain 9th in Men’s Regional One.  The M3s jumped up to fourth in Men’s West District Division 1A as they beat Dumfries 1s 3-1 at home.  Colin Gambles’ long overdue return produced two goals whilst veteran Ali Bleach scored the other.  The M4s lost in Titwood’s first pass back of the day, losing out 2-0 to Kelburne’s 5s.  The M5s away trip to Dumfries 2s had to be postponed as overnight rain left Dumfries’ home pitch waterlogged on Saturday.