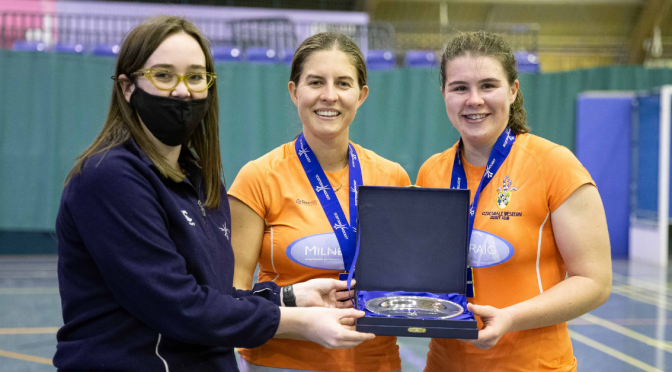 The L1s secured back-to-back 2-1 wins in their first two games before seeing off their final game with a 4-0 win. The three wins mean that Wendy Justice’s side have retained the indoor crown that they won back in the previous season of indoor hockey in Scotland dating back to February 2020.

Going into the final round of games, ‘Dale Western were without the services of Jenny Eadie, fresh from her call up to the Senior Great Britain’s Women’s squad. As well as Eadie’s absence, goalkeeper Jessica Buchanan, Fiona Semple and Holly Steiger were also unavailable. Goalkeeper Cara McAllister was the L1s only selected goalkeeper, whilst Louise Redpath and Sarah Lonergan were also drafted in.

The start to the L1s opening game against Edinburgh University could not have been better. The opening quarter brought two goals for ‘Dale Western – one each from Bronwyn Shields and Millie Steiger. The student side pulled a goal back via a penalty corner in the second quarter to keep the Titwood girls on their toes but Wendy Justice’s side produced a strong defensive reaguard in the second half to help preserve all three points.

With Watsonians then beating Dundee Wanderers 1s 8-2 in the games following, it meant Clydesdale Western realistically had to beat the Myreside team in their top-of-the-table match up. A draw would have left the L1s having to beat Grove in their final game by an almost improbable 15-goal margin. A cagey goalless opening quarter in the second game between ‘Dale Western and Watsons was eventually broken when Shields deflected in a corner in the second quarter. But no more than two minutes later, the Edinburgh side were back on level terms with a simple left to right run and finish past McAllister. The L1s did regain the lead in the third quarter, however, when Frances Lonergan was unmarked at the back post to slot in. The remainder of the game was to be a nerve wracking watch for Clydesdale Western’s support as Watsonians were denied by the post following Frances Lonergan’s goal. And with seconds on the clock remaining, an unmarked Watsons forward was denied an equalizer by a stunning goalline stick save from McAllister as the L1s secured a crucial three points.

The win meant only a point was required for the Titwood girls to seal the league title against Grove Menzieshill in the day’s final game. It was looking as though the L1s would struggle to breach the Tayside’s defence following a number of smart saves from the opposition goalkeeper. But Anna Hoolaghan scored the game’s opening goal in the first quarter to send Clydesdale Western on their way. ‘Dale Western then doubled their lead when Steiger cut a ball across in the circle for Kayleigh Justice to tap in. Steiger was at it again after half time, teeing up Lonergan for her second goal of the day. Hoolaghan then registered an assist for Kayleigh Justice to score once again to complete a solid victory and Indoor Championship.

Despite going a goal down, the M5s Development levelled through Niklas Lange in the first half. A goal each from Barry McAllister and Sam Dennis then gave the away side a 3-1 lead. The home side did pull a goal back but the M5s Development held on for a crucial three points.

Meanwhile on Saturday, the L4s were indebted to an Ann Menzies equaliser to give them a share of the spoils against Rottenrow BlueSox 1s at Glasgow Green in Women’s West District Division One. The L4s did initially take the lead through Marnie Moulson before the home side responded strongly with two goals. But veteran Menzies popped up with a crucial goal as the L4s snatched a point.

There were two west end defeats in Glasgow for the M3s and L5s. The M3s, in Men’s West District Division One, conceded a goal at the end of each half to lose 2-0 to Hillhead 3s at High School of Glasgow. Caleigh Emms was on the scoresheet to give the L5s a lead against Glasgow Accies 1s in Women’s West District Division Two. But Accies scored three goals without reply to send the L5s to a 3-1 loss.