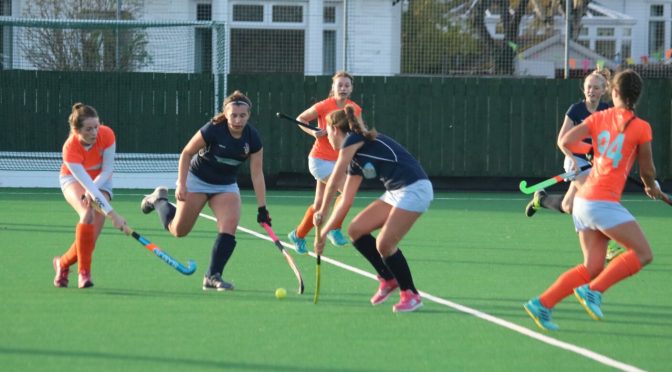 In a first half domination, the L1s took the lead through Emma McGregor.  But despite numerous chances, the L1s struggled to breakdown a solid rearguard from the L3s featuring veterans Sheena McKelvie and Lizzie Sturrock.  When they were beaten however, the L3s were indebted to a string of wonderful saves from young goalkeeper Cara McCallister.

The L1s eventually doubled their lead when a shot from Zara Mason crept over the line to seemingly send the L1s into the next round without sweat.

The game was kept alive, when the L3s kept possession high up the pitch before Rachel Whittle sent a shot expertly into the corner.  Despite this goal, the L3s could not force an equaliser as the L1s comfortably saw out the final knockings of the game.

Clydesdale Men’s 2s were agonisingly knocked out of the Men’s Scottish District Cup on penalty flicks following a pulsating 3-3 draw with Edinburgh University 2s at Titwood.

Uni 2s are top of Men’s Regional Division One having won eight and losing one of their nine league games.  This included a 5-2 win over the M2s three weeks before.  And when the away side opened the scoring in the first minute through a reverse stick shot that went high into the corner, you would have been forgiven for thinking similar was to come.  But the home side fought hard, which was a sign of things to come, when they equalised through Scott Lindsay’s close range finish.  Uni 2s regained their lead when a forward also scored from close range despite the efforts of ‘keeper Gordon Clark who almost made an astonishing save.

The M2s were guilty of missed chances, most notably Jeetinder Berman who failed to convert a pass to the back post early in the second half.  And this looked to be costly when Uni 2s doubled their lead midway through the second half.  The home side then showed a grit and determination that, apart from their 7-2 win against Inverleith the previous day, had been missing throughout the season to force two goals back.  A penalty corner was deflected in by Alex Ingram before Lindsay won and converted a penalty flick moments later.

The equaliser saw the game finish with frantic emotions as both sides tried valiantly to score a late winner but ultimately failing to do so and thus sending the tie to flicks.  Despite Clark’s super save from Uni 2s first penalty, the home side missed two after and sadly lost 4-3 on PFs.

Clydesdale Western 2s won away to Watsonians 2s to book a place in the next round of the Women’s Scottish Plate.

A brace from Heather Lang and a single goal Annabel Ballantyne gave the L2s a hard fought win.