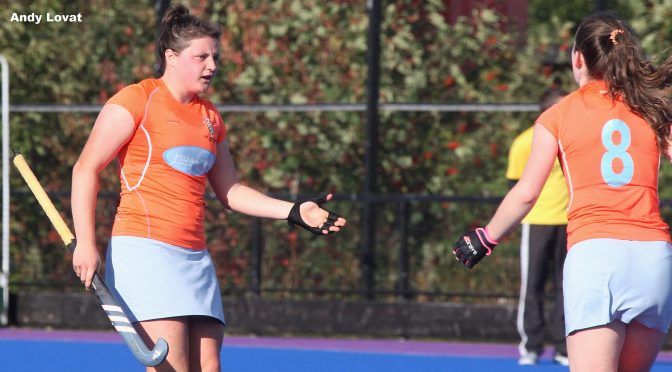 Clydesdale Western 1s got their outdoor season back underway with a high scoring win over Hillhead 1s at Upper Windyedge that takes them back to the summit of the Women’s Premiership.

Jen Eadie kept up her current position as the club’s top goalscorer with four goals to her name. Naomi Harkness, Heather Lang, Annabelle Ballantyne and captain Frances Lonergan also got on the scoresheet in a game played in miserable conditions. More importantly though, it takes Derek Forsyth’s side back to the top of the Women’s Premiership as Edinburgh University 1s narrow 2-1 win over fellow challengers Watsonians 1s means ‘Dale Western hold a four goal advantage. Dundee Wanderers 1s lost ground in the title race having been held 1-1 at GHK 1s, whilst Western Wildcats 1s kept pace with a 4-0 home win over Gordonians 1s.

If the Women’s Premiership title has to be determined on who has the better goal difference, then Clydesdale Western – who had no major absences to their squad – went about proceedings with the best possible start. Early pressure in the first quarter saw Eadie score the first of four from a penalty corner, before doubling her tally with another set piece. Eadie wasted no time recording her hat-trick in the same period converting a rebound from close range. Ballantyne made it four not long before half time, having picked up a rebound herself to slot home.

Harkness made it five in the second half, pouncing on a goalkeeper’s save to score her eighth goal of the season. A flowing team move got goal number six, as Emma McGregor supplied Lang from the right for the simplest of finishes to also notch her eighth goal of the season in the process. Lang then assisted with a composed pass for Eadie’s final goal of the game following smooth build up down the left hand side of the pitch. Frances Lonergan completed the scoring with a short corner strike to make it 8-0.

The big scoreline victory means the L1s are now four goals clear of champions Edinburgh University in the league table going into next Saturday’s clash with rock bottom Gordonians 1s at Titwood.

A spirited performance from a depleted Clydesdale 1s side was not enough to stop them going out of the Men’s Scottish Cup at the Second Round to a Grange 1s side that ultimately proved too strong on Sunday at Titwood.

A second half goal each from Euan Lindsay, David Nairn and Chris McFadden proved futile against a Grange side who showed their clinical prowess in a cup tie that was in its second rearrangement. It means Ciaran Crawford’s side are now out of knockout competition for another season, and is the third time in four seasons the Men’s 1s have been knocked out of the Scottish Cup by the Edinburgh side.

Clydesdale were low on players for Sunday’s match as shown by a total of seven absences – Andrew Allan, Nigel Lucas, Dean Baber, Sean Mahoney, Gordon Clark, Aidan Black and Struan Walker were all unavailable. The absence of two goalkeepers meant Fergus Barrows and Nathan Evans were both included for the first time by Crawford, as were Ethan Robertson and Fraser Cowle following solid showings in the 2nd XI this season.

The game started okay from the home side’s point of view, despite two chances for Grange in the opening twenty minutes that were saved well by Barrows. But as ‘Dale started to look sharper, the away side scored first. Dan Coultas found space on the left hand side of the circle to push a pass across goal that was scrambled in by Alan Johnston. The M1s nearly levelled five minutes before half time when Andy McAllan’s pick up and pass in the circle just evaded a sliding Alastair Douglas at the back post.

A minute into the second half, Lindsay stole off the last defender to break clear, but his shot was tame and easily saved. And two minutes later, the Edinburgh side punished the miss, as a free hit in the 25 was played back before being fed into Josh McRae on the spot, who reversed past a helpless Barrows.

Both teams exchanged chances, and the home side pushed their hardest to force a goal back. But Grange made it three when a baseline positioned forward played in Jacob Tweedie who took his time to slot home. The Titwood boys grabbed one back when Lindsay deflected in a swept pass, but Grange scored two in two minutes to effectively seal the tie – Johnston deflecting in from close range and McRae reversing another to double their own respective tallies.

‘Dale 1s finished the stronger, however, when David Nairn converted from the spot having been brought down illegally in the circle by older brother James on the opposite side and McFadden drag flicked home another consolation in the final knockings of the game.

There were five wins for our Clydesdale & Clydesdale Western teams on Saturday – four of them taking place at Titwood that arguably went through all the weather elements in one day’s card of games.

Clydesdale Men’s 2s are up to fourth in Men’s Regional Division One after Ewan Fraser produced a fantastic display to help Stuart Banford’s side run out 3-0 winners against Kelburne 2s in a match played in freezing temperatures. Fraser converted from close range not long into the game, before his assist for Michael Cockburn completed a super team move to double the M2s lead. Fraser scored his second early into the second half with a reversed finish. The scoreline could have been more had it not been from a number of excellent saves from the Paisley side’s goalkeeper, who most notably denied Fraser his hat-trick having tipped a goal-bound shot onto the woodwork.

The L2s and L3s remain second and third respectively in Women’s Championship Division One following home wins. Holly Steiger was in fine form for the L2s after an assist for Lucy Bliss in the first half was followed up with the winning goal in the second half against Hillhead 2s in the final passback of the day at Titwood. Meanwhile, Helen McNaught and Rachel Whittle both scored hat-tricks as the L3s ran riot in an 8-2 win against Grove Menzieshill 2s – Gill Green and Helen Walker got a goal each to complete the scoring.

The L5s got the better of Giffnock Ladies 1st XI at Eastwood High with a huge 7-1 win in Women’s West District Division Two. Lauren Black scored three, whilst Sheila Lang grabbed a brace. Helen Hood and Rachel Brown were the other scorers taking Trish Lonergan’s side up a place in the league table. An L4s – with a bare eleven players – in Women’s West District Division One narrowly lost 4-3 away to Troon 1s. Marg Taylor scoring twice and Georgia Schmolke getting on the scoresheet could not stop defeat, which now sees the L4s drop a place in the league table.

The L6s welcomed three players to senior hockey for the very first time in their Women’s West District Division Three match away to Dumfries 2s. Despite losing 2-0, youngsters Laura Morton, Alice Guzik and Erin Shearer put in excellent displays of what was their first taste of senior hockey.