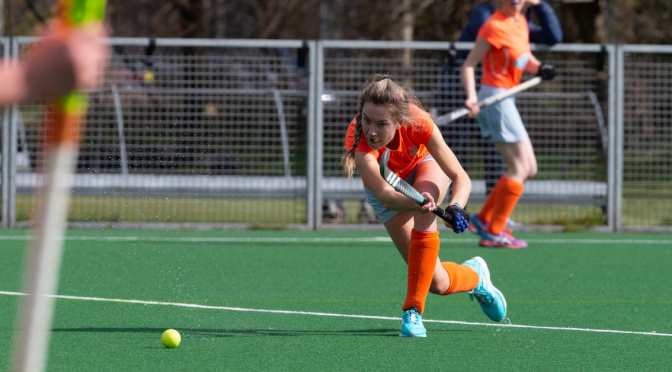 A goal in each half from the Scotland internationalist capped off an excellent personal performance at the heart of the midfield, but more importantly helped the L1s back to winning ways after a difficult couple of results in the past three weeks.

The only negative for Head Coach Derek Forsyth will perhaps be that his side could have scored more goals from the number of chances they created, especially given league leaders Watsonians 1s extended their goal difference advantage following a 9-0 win over Hillhead 1s. But the manner of the team performance will no doubt please the Scotland Senior Men’s Head Coach. The youngsters of Forsyth’s team were at the heart of everything positive on Saturday, especially from Annabel Ballantyne who arguably produced her strongest display for the 1st team since her debut, whilst the older heads of the team kept calm under pressure, especially with the score at 1-0 for such a long period of time until Shields converted her second goal near the end.

Going into the game, Forsyth was still unable to call on Paz Medina San Martin, but was able to recall Emma McGregor following a brief spell of unavailability. If you were told that ‘Dale Western had lost two of their previous three league games, you would not have been able to tell following the start made to Saturday’s contest with their Milngavie counterparts. The home side looked positive from the off and scored from their first meaningful chance. A smart team move from a penalty corner was tucked in by a composed Shields.

In the second quarter, the L1s maintained control of the game and were unlucky not to have doubled their lead when Karin Belch struck a shot wide. Goalkeeper Cara McAllister had to be alert at the near post to produce a solid save from a Western corner and seconds later a counter attack by the Titwood side brought out an equally strong block from the away side’s goalkeeper to deny Ballantyne’s fierce drive.

The second half proved nervier for Clydesdale Western more so than they would have hoped for. The simple fact of being only a goal ahead after half time and the potential long term consequences of an equaliser from an experienced opposition was heightened furthered by the scoring opportunities that came and went for the L1s in the third quarter. Heather O’Brien coming the closest but could not stretch far enough to deflect a pass to the back post.

But any lingering nerves were put to rest when the Titwood girls got their match clinching goal towards the end of the fourth quarter as Shields was on hand again to lift in from another designed short corner.

A goal each from Andy McAllan and Alastair Douglas pulled back a 2-0 deficit before half-time. But the Edinburgh side scored another two goals in the second half, taking all three points to dent the M1s hopes of catching Edinburgh University 1s – who beat Dunfermline Carnegie 1s on Saturday – in third place in the league table.

Head Coach Ciaran Crawford had a handful of absences including forward Jack McKenzie who has been in red hot form in front of goal in recent weeks. Grange stole a march early on in the game by taking advantage of a turnover in possession high up the field to score the opener. The away side briefly threatened, particularly in form of penalty corners, but sadly none were converted. The Stags made it 2-0 with a counter attack goal, but ‘Dale pulled a goal back when Jack Nairn’s baseline drive and pass to the back post was pushed out by the goalkeeper to a grateful McAllan who finished from close range. And the Titwood boys were then level before the break when Douglas’ strike found the bottom right corner of Grange’s goal.

Into the second half, the home side scored two reverse stick shots to regain their two-goal lead. From then on, the M1s continued in their attempt to create chances and did so mainly through short corners but could not find a goal back, especially after taking off their goalkeeper in the final minutes of the game.

The only win of the remaining Clydesdale & Clydesdale Western games over the weekend came from the L2s who clinched a welcome three points in the A Division of the Women’s Championship.

Two goals from Rhona McGregor helped Donald Amour’s side to a 2-0 win against Watsonians 2s, giving them breathing space in third place of the league table. The win was the L2s first league win in six attempts and their first league win since the restart of the outdoor season.

The L3s endured a difficult afternoon in the B Division of the Women’s Championship, losing 5-0 away to Waverley Inveresk Trinity 1s. On Sunday, the L6s narrowly lost to Strathclyde University 2s in Women’s West District Division Three. Edie Simmers Clark scoring in a 2-1 defeat at Millerston.

Returning to Saturday’s games, an injury-hit M2s side ran out of steam against Grange 2s in the Men’s Regional Division, losing 4-1. A goalless first half was broken when Fraser Cowle converted a corner and was unlucky not have repeated the trick moments later. But Grange 2s took advantage of a depleted M2s squad to score four unanswered goals – three coming in the final quarter.

Both the M5s and the M5s Development were left feeling hard done by following strong performances from their respective games in Men’s West District Division Three. The M5s were undone by two goals from Uddingston 5s whilst the M5s Development were narrowly beaten 3-2 by Western Wildcats 5s – goals in vain coming from Aayan Baig and Alexander Ferguson.