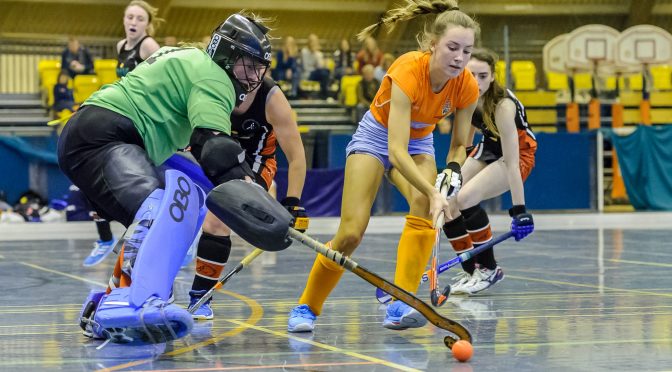 It’s been over a month since we last reported on indoor proceedings, and here are the latest results, reports and current positions for both Men’s and Women’s 1st and 2nd teams.

The Men’s 1st XI picked up maximum points in the final indoor weekend before the turn of the year thanks to single goal winning margins over Grange and Edinburgh University.  However, last weekend, the 1s lost all three games – easily the hardest weekend of the indoor season – to Kelburne narrowly which was followed up by comprehensive defeats to Inverleith and Grove Menzieshill.  Last weekend was also the final games before the league split.  The M1s were 5th after the first round of games, and go into a group featuring league leaders Grove Menzieshill, Dundee Wanderers and Edinburgh University – the latter two sides being Clydesdale’s next two games.  Indoor games for the 1st XI will resume next weekend (Saturday 20th January) at Bells Sports Centre.

The 2nd XI’s hopes of promotion from the Indoor Regional League are still high, despite losing to league leaders Watsonians.  Since then, the 2s have emphatically dispatched Glasgow University, Dundee Wanderers 3s and Stirling Wanderers – scoring 39 unanswered goals in total.  The 2s, currently sitting 3rd in the Regional League, play on Saturday at Forthbank against Uddingston, before playing Greenock Morton.

Clydesdale Western 1st XI remain in a strong position competing at the top end of the Women’s National Division One Indoor League.  On the 10th December, the L1s saw off Western Wildcats and CALA Edinburgh, before finishing the first round of games the following weekend.  Of the three games, the girls beat Hillhead but then lost out narrowly to Edinburgh University and Grove Menzieshill.  The split saw the girls in a group with league leaders Dundee Wanderers and Hillhead who they faced off to last weekend.  The L1s lost out to Wanderers but bounced back to easily beat Hillhead.  The remaining team in their split is Kelburne, who they play on Sunday at Forthbank before the crossover matches with the second split group.

Clydesdale Western’s 2nd XI have found themselves bottom of the Women’s National Division Two Indoor table.  Despite an impressive draw against Dundee Wanderers 2s, the L2s have lost the rest of the games played.  The L2s have a triple header on Sunday at DISC, taking on Inverleith, Watsonians and Bon Accord.