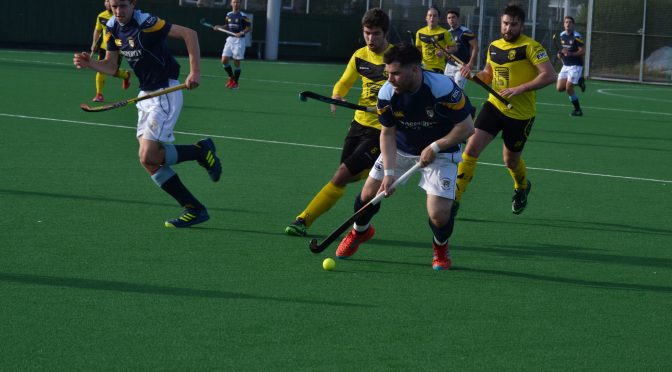 Clydesdale Western 1st XI had to come from behind to rescue a point in Saturday’s home game against Watsonians.

Despite a period of sustained pressure, the girls fell behind to the game’s opening goal scored by Watsonians.  However, ‘Dale Western hit back through Millie Steiger.  From there, Clydesdale Western had the majority of the second half play which was evident in the amount of penalty corners won.  Sadly, none were converted and the deadlock scoreline was to remain at the final whistle as the girls had to settle for a share of the spoils.  The result, along with other results in the league, sees Clydesdale Western currently outside the top 4 places.

Clydesdale Men’s 1s continued their red hot form as they easily dispatched Inverleith at Peffermill which included a hattrick from Ciaran Crawford.

Crawford’s treble takes his goalscoring tally to nine for the season.  It could have been ten had Crawford converted a penalty flick which was also awarded during the game, but sadly hit the post.  Chris McFadden with a brace and Struan Walker were the 1s other goalscorers to give the boys a comfortable three points.  The win – their third league win in a row – sees the 1s sitting in 4th in National Division One.

In the rest of Saturday’s games, the Men’s 2s produced an excellent display against Kelburne’s 2nd XI, running out 3-1 winners.  Neil Fulton struck from a penalty corner in the first half, before Jeetinder Berman tapped in early in the second half.  Fulton went on to score a second penalty corner as the M2s completed a dominant display.  The M3s also had a dominant display against Kelburne’s 3rd XI, but only managed a point in a 1-1 draw.  Despite falling behind, Duncan Adams equalised for the 3s but they were not able to go on to score the all important second goal.  The M4s scored seven as they romped to an away win at Helensburgh.  David Sturgess scored five – giving him nine for the season – whilst 4s captain Karl Richmond and Martin Slater each scored a goal.  The M5s went down 1-2 to Ayr 2s, albeit producing a good performance in their contest – Owen Gould was the scorer for the M5s.  In the one ladies game, the L2s narrowly beat Stirling University 1s.  Goals came from Tia Mansbridge and Anna Hoolaghan as the L2s continued their winning start to the season.

Well done to all of our teams over the weekend!