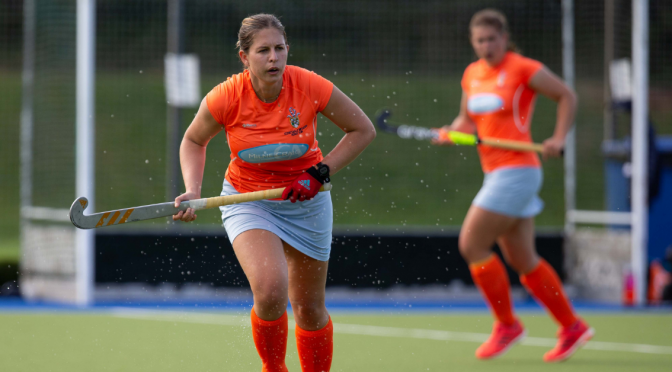 Clydesdale Western 1s secured a safe passage into the Second Round of the Women’s Scottish Cup following a big win against Edinburgh University 2s at Peffermill on Sunday.

With Uni 2s playing their hockey in the Women’s Championship Division One, there was a gap between the two sides with the L1s regularly competing in the Women’s Premiership, particularly being in direct competition with Edinburgh University’s 1st XI. But braces from Millie Steiger and Jen Eadie as well as one from Lexi Sabatelli and a rare goal too for Laura Paul gave Derek Forsyth’s team a routine win in their First Round tie.

Forsyth rotated a few members of his squad from those that have featured heavily in the L1s opening four league games. Goalkeeper Cara McAllister was given a rest, meaning Iona Colquhoun made her 1st team debut for Clydesdale Western following a summer transfer. Annabel Ballantyne and Anna Logan were recalled and debuts were given to youngsters Anna Winter and Rachel Brown.

After a first quarter of nothing major to note, ‘Dale Western opened the scoring in the second when Eadie struck home a penalty corner. Eadie then turned provider for the next two goals. After a breakdown of another corner, the Scotland midfielder set up Paul for a deflection from the penalty spot before teeing up Steiger in similar fashion.

Steiger doubled her tally for the away side’s fourth when she collected the ball after some scrappy play to lift in to Uni’s goal. Sabatelli made it five after collecting a pass before driving left of the circle and finishing with a reverse stick shot. Eadie completed the scoring – and a fine personal performance – by dribbling from the 25 metre line to the right hand side of the circle before scoring.

There were four more wins in the rest of Clydesdale & Clydesdale Western’s cup ties, including the L3s who recorded their first result of the season.

The only men’s tie that took play for Clydesdale on Sunday was the M2s who saw off Glasgow University 2s at Garscube. A first half penalty flick from the returning Dean Baber was added to by a superb solo run and reverse stick finish from Ian King.