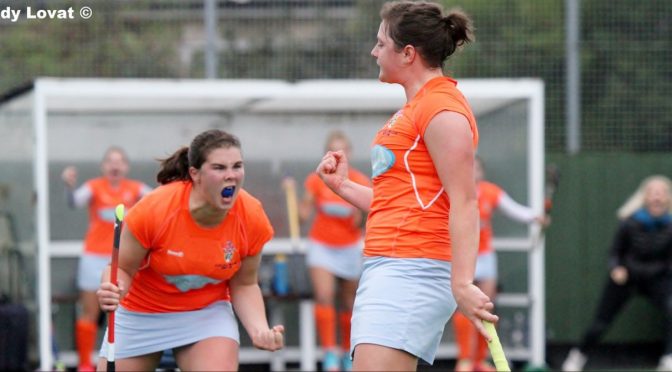 A penalty corner drag flick in the second half from Jen Eadie was enough for Milne Craig Clydesdale Western 1’s to see off Edinburgh University in a tense encounter at Titwood on Saturday.  Following an even first half, both teams had excellent chances early in the second half to take initiative, which included Eadie clipping the Uni post from a short corner.  However, she was to later make amends as she found the net midway through the second half, again from a PC, in what proved to be the only goal of the game.  The three points were secured right at the end as Mhairi Fletcher pulled off a crucial save from an Edinburgh Uni corner.  The win sees Clydesdale Western top of the Women’s National League, with their 100% record still intact.  In other ladies results, Clydesdale Western 2’s made difficult work of Waverley Inveresk Trinity, with second half goals from Kayleigh Justice and Cat Semple sealing a 2-0 win and also keeping their 100% winning start to the season.  The Ladies 3’s secured two wins over the weekend – a 7-1 win against CALA 2’s on Saturday and then a 4-1 win over Haddington Ladies on Sunday.

The Men’s 1’s continued their difficult start to the season with a heavy defeat at Fettes College to Grange 1’s.  They were on the end of a 7-2 scoreline, in which Chris McFadden scored both goals for Clydesdale.  The results leaves Clydesdale 9th in the Men’s National League table.  The Men’s 2’s didn’t fair much better as they were thrashed 7-0 away to Watsonian’s 2’s on Saturday.  But they managed  to claim a crucial point against Rottenrow 1’s on Sunday in an enthralling 5-5 draw at Glasgow Green.  A hattrick from Johnny MacKay, as well as a goal each from David Clark and John Joe Lonergan being of aid for the 2’s.  The 3’s lost their 100% record for the season as they were defeated 2-1 by Kelburne 3’s at home.  The 3’s were 1-0 down at half time, but Jeetinder Berman’s reverse stick shot had brought the 3’s level midway through the second half before a lapse in concentration led their Paisley opponents to score the winner with two minutes remaining.  The 4’s and 5’s sealed big wins on Saturday, however.  The 4’s romped to a 6-0 win over Giffnock 2’s at Craigholme, with David Sturgess claiming four. Ben Mitchell and Alistair Ogilvie also chipped in with one each.  Ethan Robertson and Simon McAlpine-Scott both scored two as the 5’s won 4-1 away to Ayr 2’s.