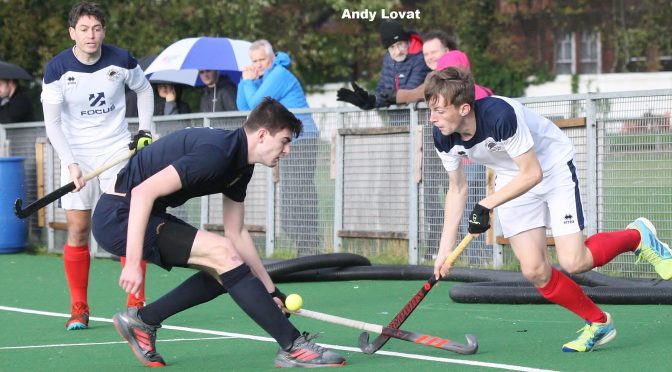 Clydesdale Western 1st XI’s top of the table clash against Dundee Wanderers 1s ended in a narrow defeat for Derek Forsyth’s side at Dalnacraig on Saturday.

‘Dale Western went in to Saturday’s game with a 100% start to the season, which included recent wins over fellow title rivals Western Wildcats 1s and Edinburgh University 1s. Wanderers had also won all of their league games going into the two side’s meeting – with the Dundonians holding a goal difference advantage to keep them top of the table.

The home side added to that goal difference advantage early into the contest, taking the lead in the first quarter. A slip in defence from the L1s gave Wanderers’ Mhairi Miller time and space to slot home a shot from the top of the circle past Jessica Buchanan.

From then on, particularly in the second half, Clydesdale Western had the majority of possession, penalty corner awards and clear cut chances. But a combination of key saves from Dundee Wanderers goalkeeper Iona Colquhoun, goal line clearances and woodwork hitting, the Titwood girls were having a day to forget in front of goal.

And their misery was complete a minute before the end. Having won a penalty corner, the L1s lost possession which saw Emily Dark of the home side lead a counter attack before setting up Vikki Bunce to double their team’s lead and clinch the points. It sees Dundee Wanderers pull three points clear of Clydesdale Western at the top of the Women’s Premiership table – the latter dropping to third following Watsonians win over GHK.

Having lost back to back league games against Edinburgh University and champions Grange, Clydesdale were keen to end a barren run against last season’s runners up in league, Play-Offs and Scottish Cup.

Despite a first quarter that saw plenty of possession, Ciaran Crawford’s side were caught out from aerial balls which led to the opening two goals for Menzieshill. The first saw a penalty stroke awarded, converted by Albert Rowling before Luke Cranney scored from open play. The second quarter saw the scoreline remain, despite the home side stepping higher up the pitch in their press. Both teams had chances to add a third goal to the game, but neither were successful.

It was a slow start to the second half by ‘Dale, which ultimately saw Grove score a third. Paul Martin was played through one on one with M1s ‘keeper Sean Mahoney, before the forward lifted a shot over Mahoney to triple the Dundee side’s lead. Clydesdale did force a goal back following positive pressure when forward Euan Lindsay converted a rebound shot from close range. It would eventually be no more than a consolation for the Titwood boys as Grove Menzieshill saw out the 3-1 scoreline.

Clydesdale Men’s 2s put in an heroic fight despite being down to ten men for over half an hour against Men’s Regional Division champions Edinburgh University 2s – but ultimately fell to a late defeat at Titwood.

The loss failed to tell the story of what was an eventful game. The M2s started brightly and felt aggrieved after Ian King’s close range finish from a penalty corner rebound was disallowed for a push on a Uni defender. King then had to come off the field with a nasty head injury minutes later, as the game continued to be a fairly even contest, with plenty of positive hockey on show from both sides. The flash point of the match came five minutes before the end of the break, when Michael Cockburn was shown a straight red card for an off the ball incident.

The M2s saw out half time, and showcased a stunning effort in the second half – led by a core of Neil Fulton, Adam Docherty and Blair Paul – to not only keep themselves in the game, but to take the game to last season’s Regional champions. The youngsters also stepped up to the cause, including Ruairidh Callaghan who did well on what was a testing M2s league debut. Defender Scott Lindsay was forced off with a hamstring injury not long into the second period, ultimately adding to an already tough game.

The student side broke the deadlock after a high press won possession in ‘Dale 2s final quarter of the field, before a forward of the away side scored with a reverse stick shot. The home side certainly had their fair share of chances, most notably from penalty corners, but all were missed either side of Edinburgh Uni 2s opening goal.

Clydesdale 2s did continue to fight hard, but with the effort not getting its rewards, weariness within the squad came into effect. Uni 2s went on to score the game’s second goal from a penalty corner with five minutes to go, before adding a third from close range right at the end. The 3-0 scoreline was arguably harsh on Stuart Banford’s side, who showed tremendous character and fight throughout, especially after going down to ten men. The result sees Clydesdale Men’s 2s sitting fifth in the Men’s Regional Division One table, four points off league leaders Watsonians 2s.

Clydesdale Western 3s got back to winning ways after a goal each from Helen Walker and Claire MacDonald gave their side a 2-0 win against Edinburgh University 3s in Women’s Championship Division One at Peffermill on Saturday.

After a decent start to the season, the L3s were brought crashing back to earth last weekend following a 4-0 defeat to Stirling University 1s in the league and then an exit in the Women’s Scottish Cup to Grange EL 1s.

Despite a number of regular personnel missing, the L3s started their game with the Edinburgh Uni 3s positively, with Walker scoring a well worked penalty corner in the opening minutes. The away side had plenty of chances to score soon after, but failed to capitalise on their creative play. Normally at the heart of every ‘Dale Western 3s performance would be the older heads, but it was the youngsters who were making an impression against Uni 3s – most notably from Charlotte Martin, Lara Monaghan, Sophie Redpath and Rachel Bannatyne.

And it was Bannatyne who set up the second goal – which would become the goal that clinched the win – with a crossed pass for MacDonald diving in to finish. The 2-0 win takes the L3s up to second in the Women’s Championship Division One table.