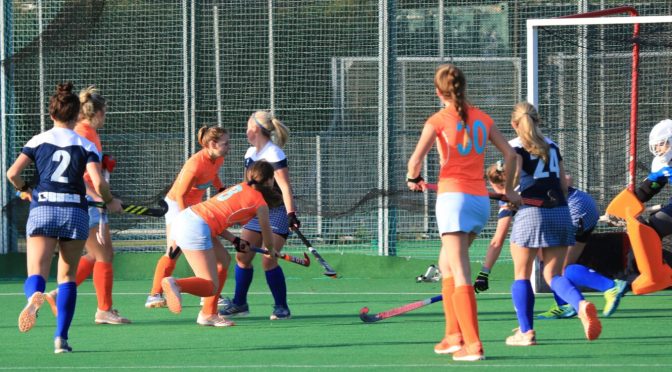 Clydesdale Western 1s delivered an emphatic statement in the title race of the Women’s Premiership – and in doing so took over at top spot in the table – by bouncing back from last weekend’s defeat to record one of their biggest wins in recent seasons against Grove Menzieshill 1s.

The L1s would have been itching to show that their 2-0 loss to Dundee Wanderers 1s last Saturday was nothing more than just a bad day at the office – especially given the amount of created chances that went unconverted. But Derek Forsyth’s side found their scoring touch on Saturday by hitting twelve goals past Dundonian side, Grove Menzieshill on a bitterly cold afternoon at Titwood. There were hat-tricks for Naomi Harkness and Heather Lang, whilst Susie Allan – on her first appearance for ‘Dale Western 1s this season – and Jen Eadie both grabbed two goals each. Bronwyn Shields and Millie Steiger both added a single goal to the home side’s tally to wrap what was an excellent goalscoring display and a truly dominant performance.

With Wanderers 1s surprisingly losing 6-0 to league champions, Edinburgh University 1s and Play-Off champions Western Wildcats 1s winning 3-0 against Watsonians 1s, the 12-0 result for Clydesdale Western takes them top of the Women’s Premiership via a considerable goal difference advantage in their favour.

It could have been different for the Titwood girls, when in the opening passage of the game, goalkeeper Jessica Buchanan had to be alert to keep out Grove. The away side, having successfully defended a penalty corner, countered to win a corner of their own and nearly converted – but saw Scotland capped Buchanan in good form to push their PC attempt wide.

That was about it for Grove, as Clydesdale Western took over thanks to a five minute hat-trick from Harkness in the opening quarter. The Northern Irish girl turned in a scrappy rebound from a penalty corner, before an inventive upright reverse finish doubled her tally. Harkness’ hat-trick was sealed when she found time and space in the circle to release a low powerful shot into the Grove goal.

The goals would continue in both first and second quarters, starting with a flowing team move that saw Shields collect a drop pass at the top of the circle before smashing in for the home side’s fourth. Ali Howie then produced a defence splitting pass for Lang to deflect first time high into the net as the L1s were beginning to score at will. Lang added another from close range and Allan then got her first, smashing home a high lofted ball to make it six and seven for the home side. Steiger then got in on the act, as no different from the preceding seven goals, by finding space to place a shot low into the away side’s goal.

In fairness to Grove Menzieshill, the Dundee side only had twelve players – which became eleven by the start of the second half – in comparison to ‘Dale Western’s full compliment. The home side, though, were not in the mood to take their foot off the gas as Jen Eadie scored two successive goals at the start of quarter three to give her side double figures. Allan deflected in a penalty corner to notch her second of the game, before Lang completed her hat-trick from close range. It was a thoroughly powerful and clinical performance from Forsyth’s side. But if the L1s Head Coach had anything to be critical of, would be that his side did not add more to the score. But a combination of the woodwork, the ‘Hill goalkeeper making a number of key saves and admittedly some gobsmacking misses from Clydesdale Western, the scoreline would go no higher than 12-0.

Seven of the other nine fixtures for Clydesdale & Clydesdale Western took place on Saturday, with four teams taking maximum points.

Sadly, there was no play for the Men’s 5s and Ladies 6s games in Dumfries. Consistent rain south of the country left Dumfries’ ground unplayable, meaning both fixtures will be re-arranged at a later date in the season.

The M4s started the card of games early, but went down 6-1 in their Men’s West District Division Two fixture at home to Giffnock 1s. The away side, who had won all their games going into the clash, unfortunately showed no signs of coming unstuck against a young M4s side – Foster Harrowell grabbing the M4s goal. The M2s will have been disappointed to only have taken a point at Fettes College against Grange 2s in a 1-1 draw in Men’s Regional Division One. A decent first half from Stuart Banford’s side ended with Euan Lindsay scoring from close range off a penalty corner. The M2s were fairly comfortable in the second period, but a loss of concentration at the midway point saw Grange 2s score from a counter attack. The away side did have a number of other penalty corners after Grange’s equaliser, with David Clark’s drag flick that hit the post being the closest. The Edinburgh side nearly won it at the end, but their penalty corner was ran down well by Antony Small to give both sides a share of the points. A strong M3s side rose up the table in Men’s West District Division One with a 4-0 win over Ayr 1s at Wellington School. There was a goal each for David Sturgess, Jordan Canning, Mitchell Pritchard and Conor Oliver.

There were contrasting results for the L2s and L3s in Women’s Championship Division One. The L2s kept their slim hopes of challenging for the league title alive by narrowly beating Grove Menzieshill 2s at Dundee International Sports Centre. Sarah McHugh – a recent return to the side – scored the only goal in a 1-0 win. The L3s, on the other hand, lost out to champions and current league leaders Edinburgh University 2s. The students made it five wins from five with a 4-1 win at Titwood, to open up a five point lead on the L3s. Gill Green scored a consolation for her side. The L4s kept up their 100% start in Women’s West District Division One, as a goal each from Ann Menzies, Aaliyah Sandhu and Emma Murray gave their side a 3-1 home win against Troon 1s. The L5s, in Division Two, completed the card of games with a 2-0 win away to Glasgow University 4s. A goal each coming from youngster Rachel Brown and Lorna Blair.