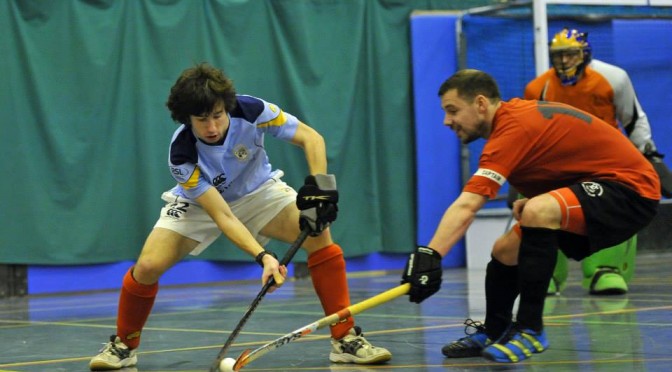 Clydesdale Men’s 2s returned to indoor action in 2019 by securing two wins at Dundee International Sports Centre (DISC) on Saturday to keep on course for promotion from Men’s Regional Indoor Division One.

The M2s got off to a flyer when they dispatched Dundee Wanderers 3s by thirteen goals.  Going with six outfield players, the M2s found plenty of goalscorers in their side including youngster Christopher Richmond who begun the scoring spree right from the off.

The M2s made it two wins from two for the day when they saw off Stirling Wanderers.  Despite being at 5-5 midway through the second period, a close range finish from Sam Hayes propelled the boys forward to score another two unanswered goals to secure the three points.  The M2s sit third in Regional One, three points and a game in hand away from table toppers, Glasgow University 1s.

Double wins for Clydesdale Western 1s ensured a second placed finish following the conclusion of round one in Women’s National Indoor Division One at DISC on Sunday.

The L1s followed up a 4-3 win over Grove Menzieshill 1s by comfortably seeing off Watsonians 1s 4-1 in their second game of the day.  The results mean the girls sit second in WNIL 1 going into next weekend’s crossover matches, three points behind league leaders, Dundee Wanderers 1s.

‘Dale Western 1s will be in a crossover group featuring Menzieshill, Edinburgh University and CALA Edinburgh.  Matches against these opposition will begin next Sunday at Bell’s Sports Centre, Perth.