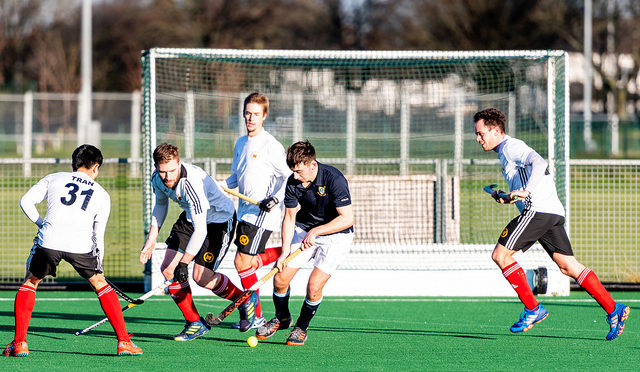 Defeat the previous Saturday to current champions Edinburgh University opened up a league race for WNL 1 glory. But ‘Dale Western were arguably slight favourites with a game in hand and a marginally better goal difference. You would have also been forgiven for thinking that the L1s were huge favourites for their fixture against Glasgow Uni – particularly given the last meeting that finished 10-0 to Clydesdale Western.

And despite a dominant performance from the home side, it was GU who took a shock lead into the second half. The students continued to frustrate ‘Dale Western who peppered the GU goal with shots and penalty corner opportunities. One was eventually taken when Ali Eadie scored close range following her injection responsibilities. It set up a grand stand finish, but Glasgow Uni held firm to take a share of the points.

The result leaves the L1s five points off top spot in third with a game in hand, meaning their fate is currently out of their hands. Edinburgh Uni maintain pole position in WNL 1 with a 9-0 hammering of Grange EL, whilst Dundee Wanderers are three points behind after they threw themselves into the race following a massive 2-1 win against fellow challengers, Western Wildcats.

Clydesdale Men’s 1st XI suffered their fifth home defeat of the season following a brutally clinical display by Uddingston in a late passback at Titwood on Saturday.

Going into the game, either side had the opportunity to go fourth in Men’s National Division One after fellow top four hopefuls Hillhead and Edinburgh University both lost earlier in the day.

But it was the South Lanarkshire opponents who took all three points after a showing of excellent finishing. Goal one came in the first half after an excellent finish into the top corner by Uddingston forward Chris Boyle. Steven Percy added a penalty corner in the second half, before Brad Hughes scored a sublime one touch finish following a breakaway. Jonjo Lavin added a fourth late on for Uddy after his cutback was inadvertently deflected in by ‘Dale defender Andrew Allan.

The result sees Clydesdale drop to seventh, with Uddingston overtaking them, Hillhead and Edinburgh University to go into the top four spots. The gap between fourth and seventh place is only two points in MNL 1.

The only wins of the day for Clydesdale & Clydesdale Western teams belonged to the L2s and L5s.

The M4s and M5s suffered defeat again despite improved performances from last weekend. The M5s and Uddingston 5s both played out an extremely competitive game in good spirit. But the telling factor was that the M5s were without an official goalkeeper which proved to be crucial as Uddy 5s ran out 7-0 winners. The M4s were closer to a result but sadly went down 1-0 at home to Kelburne 4s. The M2s missed out on the chance of all three points in their Men’s Regional Division One clash away to Watsonians 2s after conceding a late equaliser. Watsonians 2s took the lead from a counter attack, but the M2s hit back. Scott Lindsay converted a penalty flick, before setting up David Henderson for a snap short to take a 2-1 half time lead. The away side were guilty of missed chances throughout the second half and their lack of ball retention saw them concede with minutes to go despite the home side being temporarily down to nine players. Watsonians 2s almost won the game towards the end, but missed a penalty corner opportunity to give an equal share of the spoils.