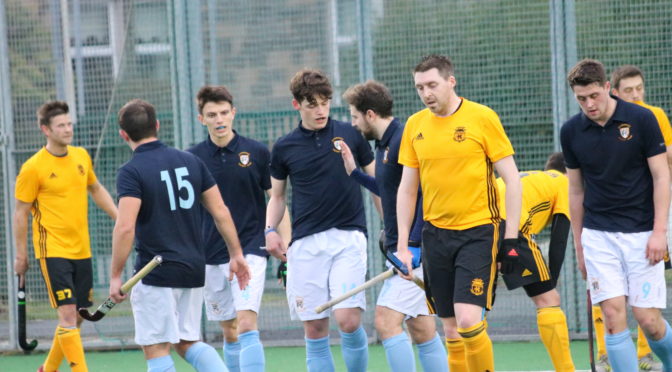 Clydesdale Western 1st XI maintained their position as league leaders in Women’s National Division One with a clinical performance against GHK at Titwood in ‘Friday Night Lights’.

The L1s, who hold a game in hand in the league, went in to the contest with GHK knowing a win would open up a three point lead before the chasing pack in WNL 1 played the next day. The first half was a cagey affair, although the home side had the better of possession and won a few corners but were unable to convert. GHK did hold a strong defensive rearguard but could not execute a couple of counter attack opportunities that came their way. It wasn’t long before ‘Dale Western broke the deadlock as good stick work from Millie Brown saw her lay the ball off for Emma McGregor, who lifted a shot into the net.

The second half saw the home side step up in their press, giving their west end opponents a hard time in their attempts to play the ball out of defense. And their press was duly rewarded with a short corner hit converted by defender Frances Lonergan. McGregor and Lonergan both added a second to the team’s tally not long after – McGregor tapping in from close range and Lonergan smashing home another corner – but it was Clydesdale Western’s fifth that was arguably the pick of the goals. A sweeping counter attack saw McGregor feed Heather Lang on the left hand side, the latter drove into the final quarter before passing a ball into the circle for Georgia Smith, who converted with a diving deflection. And Lang completed the scoring at 6-0 late on, picking up a loose ball in the circle before sending a fizzing shot low in to the corner.

The result at the time meant Clydesdale Western opened up a three point lead, but results of teams around them – namely Edinburgh University – sees them top on goal difference although still possessing a game in hand. ‘Dale Western will play next Saturday and Sunday against Uni in both league and cup matches.

Clydesdale Men’s 1st XI kept up pace in their bid to reach a top four spot in Men’s National Division One after they completed a league double against champions Kelburne with a narrow victory in a late passback at Titwood on Saturday.

The M1s went in to the game two points behind Hillhead in fifth place of MNL 1. Clydesdale had a full squad in selection apart from Graham Dunlop, who was sidelined with a shoulder injury. Kelburne were missing veteran Johnny Christie, but welcomed another veteran back in midfielder Chris Nelson. And Nelson’s return saw the away side start brightly, forcing Clydesdale ‘keeper Sean Mahoney to make a series of excellent saves in a quick flash. Kelburne kept up that pressure and arguably took a deserved lead within fifteen minutes of the match. Iain Scholefield’s driving run in to the ‘Dale circle eventually saw the ball break for teammate Jack McKenzie, who finished from close range. But in very much similar fashion to the 6-5 away win back in September, Clydesdale responded quickly with a series of moves that brought goals starting from a penalty corner, which was converted by defender Chris McFadden. Patrick Lonergan scored his first goal since his return, finding space in the circle to lift a shot into the Kelburne goal. Struan Walker then gave the home side a two goal cushion with a fierce reverse strike towards the end of the first half. The away side went in search of a second goal and sustained pressure right at the end of the first half got them their goal. An overtime corner for Kelburne was almost defended effectively, but Nelson collected the ball, taking it right side before sending an unerring shot past Mahoney.

The second half saw a more consistent pattern take place. Kelburne kept possession for long periods, but a strong defensive team performance – most notably by the hard work of forward Andy McAllan – were helping see Clydesdale through. And not only that, the M1s were possessing the threat of counter attacking via Lonergan, Walker and McAllan. The crucial sixth goal of the game was Clydesdale’s late on, having perfectly executing a counter attack opportunity as Lonergan converted his second of the game from a couple of yards out. But in what has been a familiar story in a number of games in Clydesdale’s season, the M1s were made to sweat in the last few minutes when Kelburne pulled a goal back, as a forward escaped unmarked to deflect past Mahoney. The home side did, however, see out the last few minutes of the contest to give them all three points. The 4-3 win keeps Clydesdale two points shy of Hillhead, who remain fourth following their 2-0 win away to Gordonians.

Along with the L1s and M1s, there were a total of eight league wins over the weekend for Clydesdale and Clydesdale Western teams.

Both 2nd XI and 3rd XI teams collected wins on Saturday. The M2s were indebted to the drag flicking prowess of Ciaran Crawford as they came back twice to beat Grove Menzieshill 2s at Titwood. Fraser Cowle cancelled out a Menzieshill opener late in the first half. The Dundonians retook the lead midway through the second period and, despite sustained pressure, the M2s struggled to break down Grove’s defence until two late corners from Crawford gave his side all three points – a result which now opens up a five point gap in Men’s Regional Division One away from bottom side, Inverleith 2s. The L2s hit nine past Edinburgh University 3s to keep pace at the top end of Women’s Championship Division One. Heather Lang was the pick of the goalscorers, scoring five to take her tally to 18 goals for the season. Annabel Ballantyne, Lucy Arnold, Susie Gillman and Lesley Cosh scored the others. Sandy Craig produced a top performance for the M3s as they ran out 5-1 winners away to Rottenrow 1s. Derek Linden and Ali Bleach each grabbed two goals, whilst Jamie Green scored one. The L3s won 4-2 at home to Haddington 1s thanks to two goals from Helen McNaught and one from Helen Walker and Ruth Bowie.

The L4s won on Monday night against Ardrossan 1s in Women’s West District Division One, with four goals coming from Gill Green – Anna Winter and Georgie Schmolke got the others. The M5s jumped up a place in Men’s West District Division Three with a 2-1 win against Hillhead 6s. Although it was a top performance from the M5s ever improving juniors, it was older statesmen Iain Flynn and Tim Hart that scored to seal the win. The L6s young side were left emptied handed, despite an encouraging performance in a 1-0 defeat to University of Strathclyde 2s. It was difficult day for both the M4s and L5s, losing 7-0 to Hillhead 4s and 8-2 to Glasgow Accies 2s respectively – Lauren Halley and Iona Denholm scored the L5s goals.

Clydesdale Western’s hopes of success in the Women’s West District knockout competitions were ended for both L4s and L5s at the Semi Final stages on Sunday.

The L4s lost out 2-0 away to Glasgow Accies 1s at Upper Windyedge in the West District Cup Semi Final. The L5s, in the Plate Semi Final, did go a goal up through Lauren Halley but Hillhead 3s proved to be too strong on the day and came back to win 4-2 – Anna Winter got the L5s other goal.