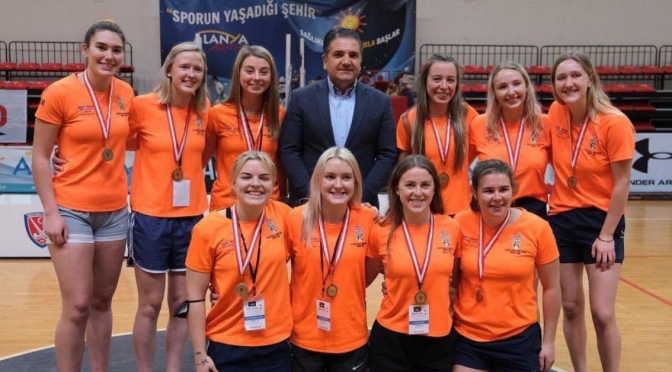 A 4-3 win against the Irish side gave ‘Dale Western enough points to guarantee a top three finish in the lone group of six teams before SV Arminen and SK Slavia Prague played each other. Prague went on to win 7-3 against Arminen to pip the L1s to second place, but it did not overshadow what was a fantastic end to a successful European indoor campaign for the Titwood girls.

Clydesdale Western began the contest with a depleted Railway Union strongly, and scored two penalty corners in the first half – both goals coming from Margery Justice. But the L1s opponents from Dublin responded impressively with two goals after half time. Millie Steiger regained the Titwood side’s lead, scoring the first of her two personal goals at the start of quarter four.

Union stuck to their task, however, to keep the game competitive and were level once more, forcing Head Coach Wendy Justice into a tactical change of going with six outfield players in the hope of scoring a goal that would likely be the game winner. And that change paid off as Millie Steiger scored again, this time from a penalty corner option to give ‘Dale Western maximum points in their fifth and final Indoor Club Trophy game in 2022. The win guaranteed Clydesdale Western a medal, which would be confirmed as bronze following Slavia Prague’s win in the subsequent match.

The third place finish is a massive improvement on Clydesdale Western’s last involvement in European Indoor hockey back in 2019 at Vienna. That year, the L1s suffered seeding relegation. But the majority of the squad from the 2019 campaign were involved in this year’s tournament and were clearly desperate to exercise a few demons. And how.

Head Coach Wendy Justice & Team Manager Peter Justice: “It was an invaluable experience and a big step up in standards for the girls. It’s also great to be back in the European medals.”

Clydesdale Western indoor captain Frances Lonergan: “It was a tough tournament and we got some great results on day one. Day two presented challenges, but I am so proud of the team for smashing out a result against Railway Union. We played well and came away with a medal and we have learnt a lot. I am excited to see what we can achieve next year.”

Clydesdale Western indoor captain Laura Paul: “On the whole, I think we’ve had a brilliant tournament. We came up against some really strong sides, but we worked together as a team and fought right until the final whistle of every game. We worked hard on our penalty corner routines before the tournament, so it was great to see us score so many goals from corners and to have six or seven different names on the scoresheet too. We had internationalists in our squad like Margery Justice, Millie Steiger, Frances Lonergan, Fiona Semple and Jessica Buchanan, who really showed their experience in playing at this level. We also had the likes of Anna Hoolaghan, Louise Redpath and Cara McAllister, who got their first experiences of European Indoor Hockey. They all stepped up to the challenge and did incredibly well.”

Clydesdale Cricket & Hockey Club President Donald Amour: “I’m delighted in the improvement from Vienna 2019. It’s good to see the girls moving forward but we need a stronger domestic game to help drive the standards up.