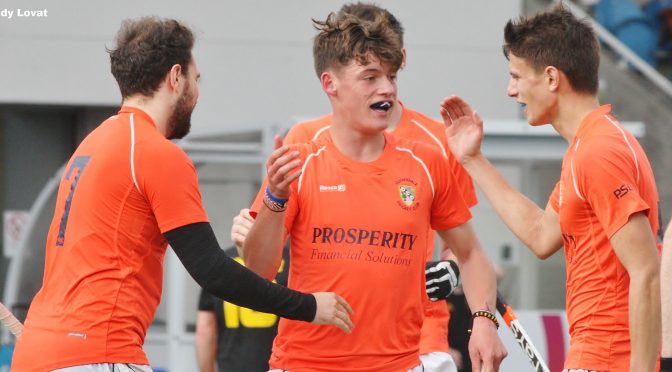 Clydesdale Men’s 1s came out on top against Kelburne in a high scoring classic at Glasgow Green to mark Ciaran Crawford’s first game in charge as coach with a win.

Crawford’s reign as coach got off to the worst possible start, however, when Kelburne veteran, Iain Scholefield powered into the D and unleashed a reverse stick shot high past ‘Dale ‘keeper Sean Mahoney.  The lead lasted two minutes, however, as the M1s foraged an equaliser when Struan Walker reversed a ball into the Kelburne circle which saw fellow forward, Andy McAllan deflect in.

McAllan and Walker combined five minutes later to give the away side a 2-1 lead, with the latter sweeping home from McAllan’s selfless play.  Similarly to Kelburne, Clydesdale surrendered their goal lead four minutes later, when Kelburne forward, Jack McKenzie collected a looping ball with a first time hit into Mahoney’s bottom right corner.  With the game already going this way and that, the away side took initiative and scored a further two goals to pull away.  The third saw a free hit outside the D moved left before a straight pass into the circle found McAllan to sweep home.  Clydesdale made it 4-2 when Walker got a crucial touch to a lifted pass into the D and double his own personal tally.

The second half started like the first and continued to bring more goals, with the away side going three goals ahead through defender, Andrew Allan.  Kelburne ‘keeper, Rory Kerr made a good save from a corner, but the rebound looped high in the air.  Allan brought it down before making space on his reverse side and putting the ball inside Kerr’s left hand post.  The home side continued to push hard to stay in the contest and got their third goal to make it 3-5.  Defender Adam Bain drove left of the ‘Dale D, before releasing a pass.  The ball pinged up, before McKenzie got a vital touch to send the ball past Mahoney.  Clydesdale then won a penalty flick after David Nairn’s mazy run saw him fouled in the Kelburne circle – Allan stepped up to send Kerr the wrong way and restore the M1s three goal lead.

Kelburne hit back with two goals in five minutes with Ciaran Wilcox and Johnny Christie both converting from close range.  With emotions high, tackles flying in and cards being handed out, the M1s had a further ten minutes to hold out for their first win of the season.  The home side pushed hard, but Clydesdale got over the finish line to secure their first three points of the season.  Clydesdale now have five points from their opening three league games.

For more photos of the M1s game against Kelburne, please click here to check out Andy Lovat’s snaps.

It was a difficult weekend for the rest of our Clydesdale and Clydesdale Western teams over the weekend – only one out of seven teams managed to pick up a point.  That was of the M4s, who drew 3-3 with GHK 2s courtesy of goals from skipper, Russell Bradley, Andy Mulholland and Eddie McLean.  The M2s tough start to their season continued, going 4-1 down to a strong Hillhead 2s side.  Despite a decent first half, the M2s were unlucky to go in 1-0 down at half time.  But the west-end side showed their experience and take the game with another two second half goals.  Despite Sam Jamieson scoring a well worked M2s move, Hillhead 2s scored a fourth goal to seal the win emphatically.  The M3s lost 2-1 to Glasgow University 2s, despite a decent display – youngster Ian King scored the M3s goal.  A very young M5s side were heavily beaten 11-0 by Helensburgh’s 2nd XI in Titwood’s first passback of the day.

For Clydesdale Western, the L4s lost out 4-1 at Glasgow Green to Rottenrow 1s, despite Ann Menzies goal.  The L5s narrowly lost out to East Kilbride 1s 2-1 at Titwood, with Lauren Halley converting from the spot.  The L6s game was arranged for Sunday, which saw ten U18 girls playing – some of whom were playing their first senior game – and put on a valiant display despite losing 4-0 away to Arran 1s.

Once again, well done to everyone who played this weekend.  Congratulations to the M1s for their first win of the season and well done to a number of youngsters who made their senior debuts over the weekend!