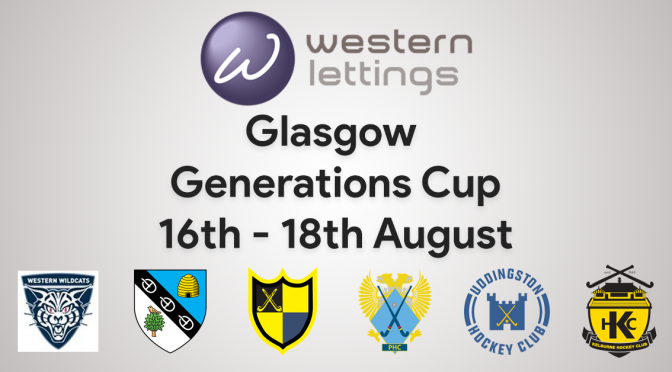 Teams from Clydesdale and Clydesdale Western will take part in the 2019 Western Lettings Glasgow Generations Cup, which will be held at Old Anniesland this weekend.

Clydesdale Men’s 1s, Men’s 2s, Clydesdale Western Ladies 1s and a mixed U15 team will play against clubs predominantly from the west of Scotland as part of pre-season preparations for the 2019-20 season. The clubs alongside Clydesdale and Clydesdale Western that will feature are Hillhead as hosts, Western Wildcats, Kelburne and Uddingston. Perthshire and Watsonians will also feature but only in the Over 35s competition, where Clydesdale will not be fielding a team.

The competition, which was designed last season for Men’s 1st XI teams as a pilot idea, sees games being played for a total of 30 minutes one way (25 minutes for the U15s) – meaning there will be no half time interval. A win is worth four points, whilst a draw will give both sides two points. The team that collects the most points from their four games will be declared the winner of their respective competition in the Western Lettings Glasgow Generations Cup.

On Friday, the U15 Mixed tournament will take place, with Clydesdale & Clydesdale Western’s first game starting at 7.00pm against Western Wildcats. The U15s will then play another three games straight after, before having the final round of matches off.

On Saturday, both 1s and 2s Men’s sides will feature in the Elite & Regional competition with potential appearances from new boys Ben Wilson and Ali Douglas. Nigel Lucas may also feature following his return to Clydesdale. Ciaran Crawford will be Head Coach of the 1s side, whilst Stuart Banford will be in charge of the 2s. The 2s first game will start at 10.30am on the sand-based pitch against Kelburne 2s, whilst the 1s will take on Kelburne 1s from 11.10am on the water-based pitch.

Then on Sunday, Clydesdale Western will take part in the Women’s Elite tournament, with their first game being at 11.10am against Kelburne 1s. The L1s will be without Head Coach Derek Forsyth due to his involvement with the Scotland Men’s team at EuroHockey Championship I in Antwerp, Belgium. Player wise, ‘Dale Western will be without the services of Heather Howie, as work commitments means she will be transferring to a club north of the country. Jen Eadie and Millie Steiger may also sit out following their promotion triumph with the Scotland Women’s team at EuroHockey Championship II last weekend. Ali Howie, on the other hand, could feature for the first time in nearly 18 months. Ali – who recently retired from the Scotland Women’s team with 93 caps to her name – had been sidelined long-term following a broken kneecap that was sustained towards the end of 2017-18 season, but is now back to training.

The club would like to wish all four Clydesdale & Clydesdale Western teams the very best of luck the in the Western Lettings Glasgow Generations Cup.