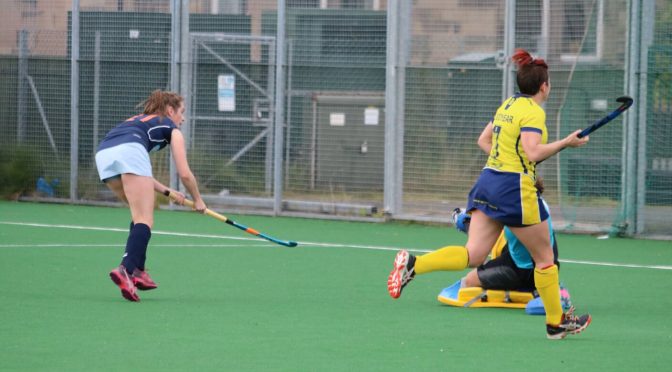 Clydesdale Men’s 1s secured a passage into the next round of the Men’s Scottish Cup after a hard fought win against Hillhead at Titwood on Sunday.

Both sides were coming off the back of a league match the day before, so tired legs during the match was to be expected.  But Clydesdale came out of the blocks fast and took an early lead.  Struan Walker found space at the top of the circle to send a front stick shot low past the Hillhead ‘keeper.  Walker then doubled his and Clydesdale’s account five minutes later.  Dean Baber slapped a pass into the circle, which took a deflection of a Hillhead stick before arriving at Walker who took a touch before sending another low shot into the visitor’s goal.  Hillhead applied pressure to force a goal back before half time, but the home side held firm.

A few minutes into the second half, however, saw Hillhead get a goal back.  A drag flick pass from the left was put past ‘Dale keeper, Sean Mahoney with a deft touch from a Hillhead forward. A couple of minutes later, Baber’s stick work beat a couple of Hillhead defenders before arriving into the circle and lifting over the ‘keeper to restore ‘Dale’s two goal lead.  The two goal lead lasted no more than ten minutes when Hillhead won a corner and sent a drag flick shot past Mahoney.  From then on, Hillhead stepped up in their efforts to force an equaliser which brought out crucial saves from Mahoney and the defence in front of him.  The M1s eventually held out for the last 15 minutes to seal a place in the 2nd round of the Men’s Scottish Cup.

Clydesdale Western also sealed a place in the next round of the Women’s Scottish Cup after seeing off GHK at Titwood on a late Sunday pass back.

Much like the Men’s 1s, both sides were coming off the back of a Saturday league encounter.  In addition, Clydesdale Western picked a side without players representing the Scottish national side, so a tough game was to be expected.  But the L1s got off to a flyer as they went 3-0 up midway through the first half.  Anna Hoolaghan opened the scoring, before Emma McGregor scored two goals – all three goals finishing impressive team moves by Clydesdale Western.  GHK scored an overtime penalty corner, which gave them a glimmer of hope going into the second half.

But Clydesdale Western looked to have secured the game, when Georgia Smith capitalised on a defensive error to push the ball into an empty goal and restore the L1s three goal lead.  GHK then scored from another penalty corner not long after to cut down the lead.  The lead could have been cut further, as the away side secured a number of corners, but the home side were indebted to great saves from goalkeeper Jessica Buchanan and brave blocks from her defence.  ‘Dale Western saw the game out at 4-2, and like the M1s secured a place in the 2nd round of the Women’s Scottish Cup.

A fair amount drama ensued on Cup Sunday, with the biggest shock coming from the L3s who put out Kelburne’s 1st XI out of the Women’s Scottish Cup thanks to a 3-1 win at Glasgow Green.  Veterans Gill Green (two) and Helen Walker got the goals to send the L3s into the 2nd round of the Women’s Scottish Cup.  The L2s almost pulled off the shock of the Scottish Hockey season, but sadly lost out on penalty flicks to Women’s Scottish Cup holders, Edinburgh University 1s at Titwood.  Uni took the lead, but Sarah Lonergan grabbed an equaliser for the home side.  The L2s held firm with ‘keeper Mairi Fletcher pulling off a number of superb saves to send the tie to flicks.  But it was the holders who prevailed, winning 4-2 on PFs to join the L1s and L3s into the 2nd round of the Women’s Scottish Cup.  The M3s also lost out on PFs in the Men’s Scottish Reserve Cup at home to Grange 5s.  The M3s played out an intense 3-3 draw, which saw Conor Oliver score twice and Ben Mitchell also scoring.  The M3s lost 4-3 on flicks and will now enter the Men’s Scottish Reserve Plate.  There were two high scorelines in the final two matches, which were both early pass backs.  A young M2s side, away to Madras College FP 1s in St Andrews, sealed a place in the 2nd round of the Men’s Scottish District Cup with a 14-0 win.  Colin Moulson scored six goals as the M2s completed an excellent team performance.  Ben Galloway, Sandy Craig, Jeetinder Berman (all with two each), Blair Paul and Ethan Robertson were the M2s other goalscorers.  The L4s, who travelled to Inverness to play Orkney 1s, went out of the Women’s Scottish District Cup.  Despite going in 2-1 down at half time, Orkney produced a ruthless goalscoring peformance to run out 11-1 winners – Kirstin Stobo scored the L4s only goal.

Once again, a tremendous effort from our teams in action in Sunday cup games – well done to all!