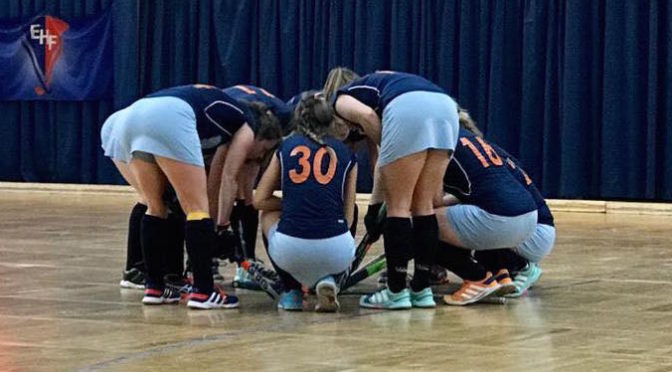 In their first game of the day, ‘Dale Western took on Croatian side, HAHK Mladost but fell behind after three minutes.  Margery Justice got the L1s back on level terms through a penalty corner and that was how it remained going in at the break.  But the Titwood side were caught early again, this time in the second half before Mladost added another three goals to give them a 5-1 lead.  Despite Justice completing her hattrick – with another from a corner and a penalty flick – the girls ran out of time to complete a four goal comeback.

Clydesdale Western played their second game of the day against SK Slavia Prague, from Czech Republic.  And despite another encouraging performance, the girls lost again by a two goal margin with the scoreline finishing 4-2 to Slavia Prague.  The L1s conceded their first goal quicker than they did against Mladost, inside the opening minute of the match.  ‘Dale Western foraged a quick equaliser in open play through Susie Gillman, but they could not hold out to half time as they conceded a second goal to the Czech side.  Slavia Prague added a third not long into the second period, but a penalty corner from Justice again gave Clydesdale Western a way back in.  Slavia Prague went on to score a fourth late on, however, to give them the necessary breathing space all the way to full time.

Despite both results, Clydesdale Western collected a bonus point in both games having only lost both games by two goal margins.  A win in Pool games of EuroHockey Indoor Club Trophy sees an award of five points, a draw gives two and a loss by less than three goals gains a point.

The results mean that Clydesdale Western will miss out on a Promotional Play-Off chance, and will now need to play in the Relegation Play-Offs to avoid the drop for Scotland’s seeding in European indoor hockey.  The L1s will play their final game against HF Lorenzoni Bra at 11.20am (10.20am GMT), before playing crossover games against opposition from Pool A on Saturday.