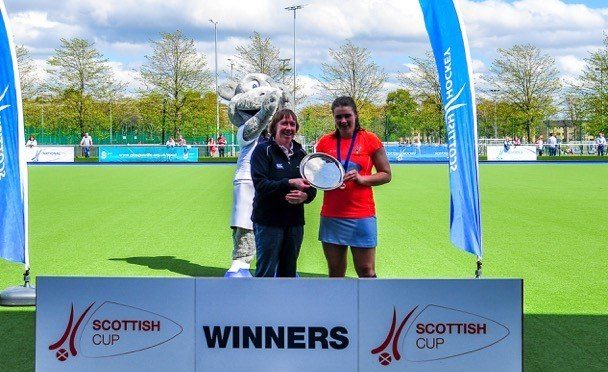 Clydesdale Western 1st XI avoided any potential upset to take the Women’s Scottish Plate after a comfortable 5-0 victory over Edinburgh University 2nd XI in the Final at Glasgow Green on Sunday.

Before the game, it was evident that ‘Dale Western were favourites, with the L1s playing their league hockey in Women’s National Division One, whilst their opponents played in Women’s Championship Division One.  However, with a favourites tag, the girls had to avoid any signs of complacency.

And they did so to great effect, as a strong start to the game helped Clydesdale Western in taking the lead through Lucy Lanigan’s intricate lifted effort 15 minutes in.  Lexi Sabatelli then doubled the girls lead after she found space in the penalty circle to send a low reverse stick shot past the Uni ‘keeper five minutes later.

The first half scoring then doubled when Zara Mason swept home high for 3-0, before Millie Steiger scored at the second time of asking at the back post from a penalty corner.

In the second half, Edinburgh University 2s kept a tighter shape to frustrate ‘Dale Western, and restrict the amount of chances in comparison to the first half.  But midway through the second half, the L1s made it five through Jen Eadie – her reverse stick shot going low and hard through the goalkeepers legs.

And that was the scoring complete, as the girls saw it through to full time with a 5-0 win and complete a Scottish Plate victory

Congratulations to Clydesdale Western 1st XI and to coach, Derek Forsyth on their Plate win.  Commiserations to Edinburgh University 2s.  Next up for our girls will be the Scottish National Play-Offs – they face Grove Menzieshill at Glasgow Green from 2.00pm.

In the rest of the weekend’s games, saw the Ladies 2s and 3s complete their seasons with contrasting outcomes.

Clydesdale Western 2s lost out on the Women’s Championship Division One title after losing on Saturday to Edinburgh University 3s 3-2 at Peffermill.  Despite a goal each from Sophie Redpath and Margery Justice, the L2s defeat meant they had to win by an impropable 23 goals against Grove Menzieshill 2s the following day.  And despite beating the Taysiders at Titwood, they only managed a 5-1 win – with two goals coming from Gill Green and a goal from Wendy Justice, Sharon Duncan and Sarah Lonergan.  This result meant Edinburgh University 2s secured the league on goal difference.

The L3s, however, finished 4th in the same division, after their 4-0 win against CALA Edinburgh 2s at Titwood on Saturday.  Green scored a hat-trick – and her brace on the Sunday took her to 28 goals for the season – whilst Rachel Whittle scored one.

Despite not winning the league, well done to the L2s for their great efforts this season.  Well done also to the L3s for a very good season finishing top 4 in the same division.