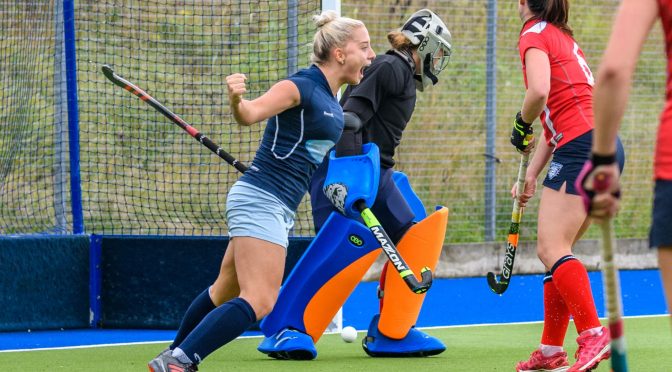 Clydesdale Western’s strengthened their chances of a top two finish in Pool A of EuroHockey Club Challenge I after narrowly beating Czech side SK Slavia Prague on Saturday morning.

‘Dale Western followed up a goalless draw in their opening game against Rotweiss Wittengen with a 3-2 win over Slavia Prague – goals coming from Ali Eadie, Lexi Sabatelli and Jen Eadie respectively. The result sees the L1s take five points, as per competition rules, to leave them top of Pool A in Club Challenge I with one game remaining.

In the contest itself, Clydesdale Western were much improved from their goal shy performance the previous day and showcased their superiority throughout the majority of the match. The L1s began well as Emma McGregor and Sabatelli both had chances in the first few minutes. The latter had another shot that hit a defender on the line resulting in the award of a penalty flick that was duly despatched by Ali Eadie. A mix up in the ‘Dale Western defence lead to Slavia’s equaliser in the second quarter. But the L1s responded immediately when a sweeping move forward saw the ball arrive at Sabatelli, who produced a reverse stick shot from the top of the circle to regain the lead for her side.

Clydesdale Western began to use the ball effectively as they continued to create scoring chances, in particular from penalty corners. A few were denied by the Czech opposition, but in saving one saw a rebound fall kindly for Jen Eadie, who slotted to give the L1s a 3-1 lead. ‘Dale Western had a couple of more chances to make it 4-1, but were a tad wasteful before Slavia Prague scored a second goal in the last minute. Clydesdale Western did, however, see out time to give them their first win of EuroHockey Club Challenge I this season.

On Sunday morning, the L1s will face Gintra Strekte from Lithuania in a game that a win would be required at the very most if they were to finish top of Pool A and qualify for one of four Promotion Play-Off Final spots.