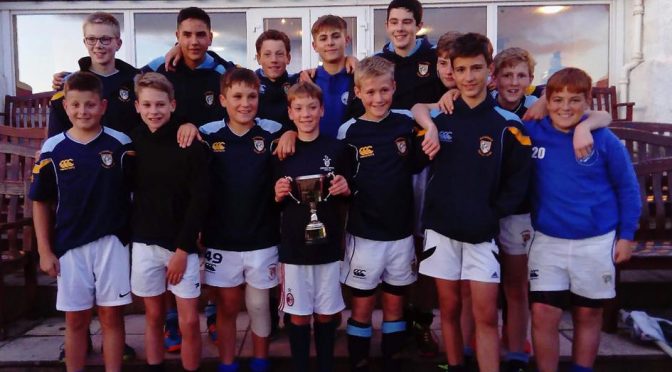 Clydesdale Under 15s Boys side celebrated securing the Gerry Ralph Trophy on Friday after a tense win against Western Wildcats at Titwood.

Both ‘Dale and Wildcats displayed fantastic attacking and energetic hockey throughout the contest, but it was Wildcats who struck early in the first half.  Clydesdale responded brilliantly when Ian King found space in the penalty circle to unleash a reverse stick shot into the roof of Western’s goal.

The home side gathered further momentum in the second half and were awarded a penalty flick after a foot on the line from a Wildcats defender at a penalty corner.  Ethan Robertson slotted the flick with ease to give ‘Dale the lead.  Western came back strongly, particularly towards the end of the Final, in a bid to force an equaliser.  But the Titwood boys held on till the final whistle to secure the Gerry Ralph Trophy.

Commiserations to Western Wildcats, but congratulations to the U15s for their win.  Many thanks to Mark Ralph who was in attendance before presenting the trophy to Clydesdale, to Donald Amour and Colin Moulson for their management of the team and to all who came to support.