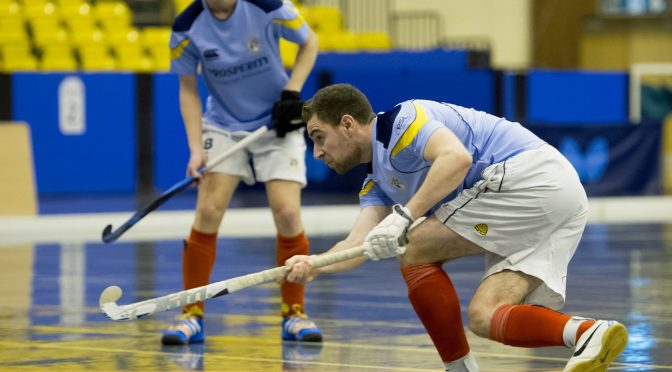 Unsurprisingly, the L4s and L6s scheduled outdoor games were postponed due to the weather.  But we are able to report on the weekend’s M1s and L2s indoor action.

Clydesdale Men’s 1st XI will have to wait till next week to see if they will play Men’s National Indoor Division One hockey next season after surrendering a late lead to Edinburgh University before losing to Dundee Wanderers at Bell’s Sports Centre in Perth on Saturday.

The day actually started with Clydesdale’s faint hopes of a top four spot in this season’s indoor competition being ended after Dundee Wanderers surprise win against Grove Menzieshill.  However, a Clydesdale win against Edinburgh University, would have sealed their place in next season’s Indoor Division One league.  Fraser Hirst put ‘Dale into a 2-0 lead, before Uni hit back with two by half time.  Patrick Lonergan put the M1s back in front, but with seconds remaining Clydesdale lost their goal lead to finish with an equal share of the points.  Their second game against Wanderers saw the M1s lose 5-3 despite a brace from Chris McFadden and another from Lonergan.

The results mean Clydesdale sit three points above Edinburgh University in Pool A of the Indoor split.  Clydesdale require a point to be safe but play Pool A leaders Grove Menzieshill in their final game.  Only a loss to Menzieshill and an Edinburgh Uni win against Dundee Wanderers can see ‘Dale drop below Uni before the crossover games.  These games will take place next weekend at Bell’s Sports Centre.

On Sunday, the L2s finished their indoor season bottom of the Women’s National Division Two table despite winning their first game of the season.

The L2s lost 5-0 to league leaders Grange EL at DISC in their opening game.  But did win their final game of the day and the indoor season after beating Grove Menzieshill 2s 4-2.