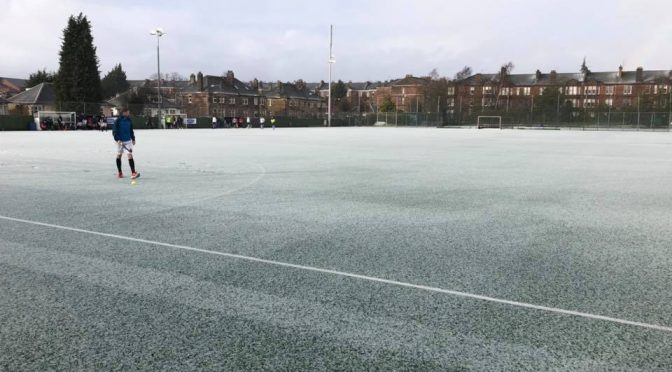 Clydesdale’s Men’s West District teams were all unbeaten in Saturday’s round of league matches.

Despite the tricky conditions, the M4s took a valuable three points in Men’s West District Division Two. Against Oban 1s at Titwood, which was temporarily halted due to a hailstorm, Spencer Cox and Jamie Gambles both grabbed a brace each, whilst veteran Donald Amour also got on the scoresheet in a 5-3 win. The result see the Men’s 4s jump to 9th in the league table, albeit having played a few games more than the teams around them.

The M3s and M5s – in slightly better weather – took a point in their league matches, both drawing 0-0 respectively. The M3s were away to Dumfries 1s and despite having a host of chances, Craig Bradley’s side were unable to find the deadlock breaker. However, the M3s are now up to 6th in Men’s West District Division One. A young M5s side put in a hardworking display to take a point away from Ayr 2s. The point was preserved towards the end thanks to some key saves from ‘keeper Graham Bryson.

Clydesdale Western 3s were knocked out the First Round of the Women’s Scottish Plate on Saturday against Hillhead 1s at Upper Windyedge.

Having exited the Scottish Cup, the L3s dropped into the opening rounds of the Scottish Plate. Having been drawn to Women’s Premiership side Hillhead 1s, an experienced L3s side put in a determined display throughout the contest.

But a single goal from the west end side was enough to give them the win and send the L3s out of knockout competition for another season.

All three Clydesdale Western West District games were cancelled due to the weather, whilst the M1s Scottish Cup tie with Grange 1s lasted a little over 90 seconds before being abandoned.

The M1s and Grange 1s were preparing for their second scheduling of the Men’s Scottish Cup Second Round tie on Saturday. And despite the weather being fine before pushback, an aggressive hailstorm hit the pitch just as proceedings got underway. The tie lasted a minute and 33 seconds before umpires John MacKenzie and Greig Cunningham halted play. Such was the length of the hailstorm, the pitch was deemed unplayable, and the contest was abandoned permanently. The tie will now be played on Sunday 1st March, 3.00pm pushback.

The L6s away fixture at East Kilbride 2s was postponed early on Saturday morning. Rain from the previous day left the pitch at Duncanrig High School unplayable. The L4s and L5s home games were both called off just before lunchtime on Saturday due to the weather warnings. All three league fixtures will be replayed on a date that is to be confirmed.