PSL Clydesdale 2s played Uddingston 2s at Hamilton.  The boys had a hard day and lost 4-1. This young 2s team are still looking for their first win. There is great potential in this team who just need to get used to playing together and the results will start to come.

PSL 5s were also at Hamilton playing Uddingston 5s. This Uddingston team was very young but full of talent. The hosts dominated the game and scored twice before Suhit Amin scored to get ‘Dale back into the game. Unfortunately the game ended with a nasty injury to Peter McGinily who required 4 stitches after being struck by the ball. Hope the head is not too sore Pete!

Congratulations to Flora Walker who was part of the Scotland U18 who won the UK Schools this weekend. The Scotland Girls won all their games – a great achievement.

The boys were less successful but finished well with a 5-1 win over wales to finish 5th. Dean Baber, James Nairn, Jack Jamieson and  Chris McFadden were in the Scotland Squad.

First weekend of the season saw some – not all – the teams start their hockey.

Milne Craig 2’s got their season off to the perfect start with a 4-0 win away to Erskine Stewart Melville. The girls pressed from the onset and dominated play throughout the first half, yet to be patient for their first goal, as the opposition keeper kept her team in it. However Laura Mann eventually broke the deadlock with a shot from a penalty corner that was turned into the goal by a defender. That was to be the only goal of the first half, but the good play continued throughout the second half as our fitness prevailed and a further penalty corner goal came from a deflection from Lara Tomkins. Rachel Morrison also cooly put the ball in the goal, with Robyn Belch completing the scoring following some good build up play.

PSL Clydesdale 2s went through to Edinburgh to play Grange 3s at Fettes. The performance was good with Clydesdale dominating possession but the only goal came from Grange 3s who held on to win 1-0. A hard lesson for the boys to take.

PSL Clydesdale 3s lost their opening home game going down 3-1 to Rottenrow 2s. Rottenrow had started well and scored in the first half . Dale boys struggled to get any rhythm into their game but just after half time a bit of individualism from David Henderson saw him get round the keeper a flick into a empty net from a tight angle. Unfortunately this brought no great improvement in Clydesdale’s play as the ball was turned over cheaply time and again. Rottenrow were more incisive and scored twice to deservedly win 3-1. 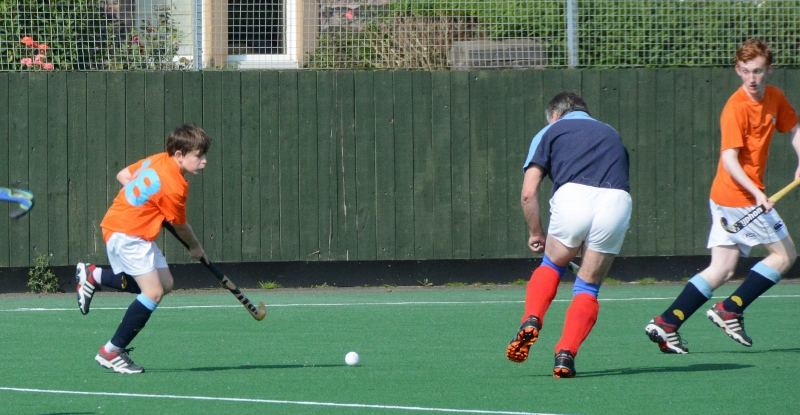 The early morning game saw a Clydesdale derby between the 5s and the 4s.  In a more even game than  many expected but the 4s eventually ran out 4-1 winners as the 5s ran out of legs. Not long into the 2nd half Suhit Amin had made it exciting by getting the 5s back to 1-2 down …but then the passing and running from the 4s saw them safely home.  Alistair Ogilvie secured the first jug of the season by bagging a hat-trick with Connor Oliver getting the other.