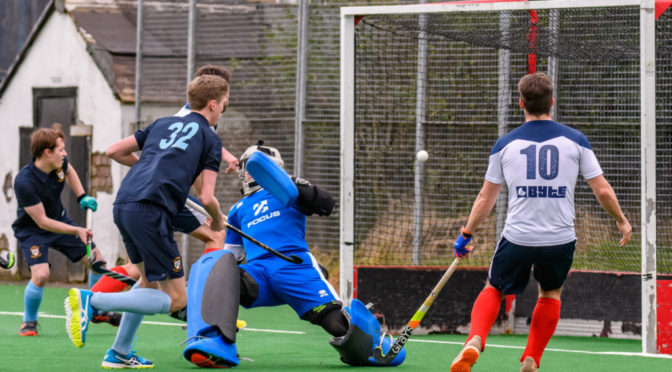 Clydesdale Western 1s fell to defeat against Edinburgh University Ladies 1s in Women’s National Division One on Saturday after conceding an overtime penalty corner to open up a nail biting title race.

The L1s went in to the game top of the league via goal difference and with a game in hand. So a win against Uni at Peffermill could have seen them potentially open up a six point gap on last season’s champions.

And the contest could not have gone more in the Titwood side’s favour, taking a 1-0 lead through Heather Lang. Lang making it two in her last two 1st XI games and 19 goals for the season. But Edinburgh Uni hit back with an equaliser after a ball across the circle was converted by a Uni forward. The contest looked to be heading for a draw until the home side won a corner effectively on the full time whistle, which was converted for a 2-1 win sparking wild celebrations for the student side.

The result means Edinburgh University displace Clydesdale Western at the top of WNL 1, with the L1s dropping to third following Western Wildcats weekend win. ‘Dale Western – who next face Glasgow University at home – still hold a better goal difference, meaning a win in their game in hand would send them back to the top.

Clydesdale Men’s 1s missed out on the chance to jump to a top four spot in Men’s National Division One as Edinburgh University Men’s 1s came back to take three points in a late Saturday passback at Peffermill.

The M1s needed a win and a Hillhead loss to Western Wildcats to go into fourth in MNL 1. And with Hillhead losing to Wildcats, Clydesdale were on their way as Chris McFadden converted a penalty corner in the first half.

But the students, who along with Uddingston are also in for a top four shout, roared their way back into the contest scoring two quick goals in the second half. The M1s stepped up their attempts to equalise late on, but left too much space at the back which the student side capitalised on to score a third. Clydesdale did score a consolation, however, as Andrew Allan converted an overtime corner.

The result, coupled with Uddy’s 6-2 win against Gordonians, means there is a proper race to finish fourth in MNL 1. Hillhead hold the advantage, despite their loss, on 21 points. Uni and ‘Dale are level on 19, whilst Uddingston are a point behind in seventh place. The M1s will next play Uddy at home in the league.

It was a difficult Saturday for the rest of our Clydesdale & Clydesdale Western teams, with the M2s being the only team to pick up points after their crucial win at home to Western Wildcats 2s.

The M2s pulled further away from Inverleith at the bottom of Men’s Regional Division One following a 4-2 win against their opponents from Auchenhowie. Good work from Scott Lindsay saw Alex Ingram convert from close range. Wildcats equalised through a slap shot but Lindsay restored the lead from the spot after a stick tackle on Jeetinder Berman by the Wildcats ‘keeper. Berman had a hand in the third goal after he slipped the ball for David Henderson to double the home side’s lead. The away side scored a corner not long after, but the M2s made sure of the points when Aidan Black’s drag flick attempt at goal was bravely deflected in by Fraser Cowle.

The M3s went down in Men’s West District Division 1A, losing 3-1 at home to Uddingston 3s – Spencer Cox scoring for the home side. The M4s and M5s had difficult afternoons, going down 0-7 and 0-8 to Giffnock 1s and Anchor 1s respectively.

The L2s hopes of catching Edinburgh University in Women’s Championship Division One are effectively over after losing in a game marred by horrible weather conditions at Titwood. Uni 2s scored the only goal of the game right on half time, which means they have now opened up a 12 point gap on the L2s. The L3s lost 2-1 away to Stirling University, despite a goal from Helen Walker. The L4s had a difficult day in Women’s West District Division One, going down 5-0 at home to Glasgow Accies 1s. Goals from Lauren Halley, Iona Denholm and Annie Lonergan were still not enough for the L5s as they fell to an agonising 3-4 defeat to Ferguslie 1s.

Clydesdale Men’s 1s bowed out of the Scottish Cup at the Quarter Final stage despite a battling performance against Grove Menzieshill at Titwood on Sunday.

The M1s got off to a difficult start inside four minutes, when Albert Rowling converted a penalty corner for the away side. The pattern of the game, in truth, fell a bit flat for both teams, as not many chances presented itself and a few unforced errors starting creeping in. Chris McFadden did have a corner opportunity, but was saved by the Menzieshill ‘keeper. It was only until the last few minutes of the first half when another goal came, and again it was for the away side. A corner was switched left and slapped to which ‘Dale goalkeeper, Sean Mahoney saved. But the rebound was converted from close range by Grove’s Cyril Varghese to double his side’s lead going in at half time.

In the second half, Menzieshill had more pressure in ‘Dale’s half but were unable to create anything clear cut. And when the away side had a man sent off for two minutes, the home side scored to find their way back into the contest. Euan Lindsay, posting up for a pass at top D, skipped past a challenge before calmly lifting into the net. The ten minutes that followed saw Clydesdale step up and force a couple of chances, but none were converted. And it proved to be a damaging as with two minutes to go, Menzieshill were awared another penalty corner, although was initially saved by Mahoney saw the rebound converted by Ollie James to seal a 3-1 win for Menzieshill.

Clydesdale Western 1st XI’s weekend against Edinburgh University 1s finished off with an exit from the Women’s Scottish Cup following another away defeat at Peffermill.

Admittedly in comparison to Saturday’s performance, the L1s did improve but could not find the goal this time around. Uni took the lead from a scrappy goal and as ‘Dale Western pushed hard to force an equaliser, the home side doubled their lead with ten minutes to go.

That was how the contest finished, with the L1s now turning their attention to the league before finishing off their season with European competition.

There were two success’ on Sunday, as both the L2s and L4s sealed Semi Final places in their respective Plate competitions.

The biggest win of Sunday belonged to the L2s, who beat Women’s National Division One opposition in GHK 1s on penalty flicks in the Women’s Scottish Plate. Helen Walker scored in a 1-1 draw in normal time before the L2s won 4-3 on flicks at Old Anniesland to seal a place in the Semi Finals on the Plate. The L2s are the only non-Women’s National Division One team left in the competition.