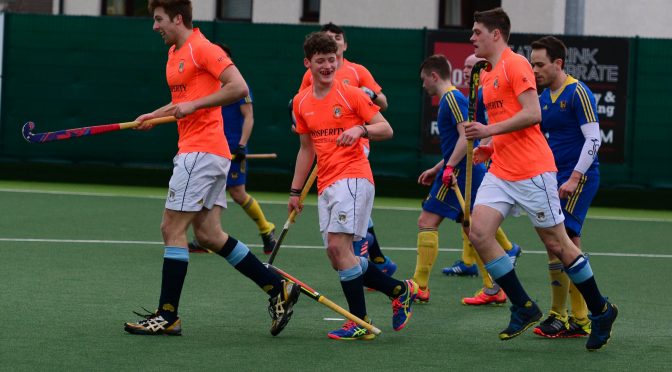 Andrew Allan had given the M1s a first half lead from the penalty spot.  However, the home side equalised twice – once from Allan’s PF and a second time after ‘Dale skipper Patrick Lonergan had briefly regained the lead.  The game was settled thanks to a cool finish from Walker to give the away side a valuable three points.  The result sees Clydesdale up to 6th in Men’s National Division One, jumping above Uddingston, Dundee Wanderers and Hillhead.

Clydesdale Western 1s kept up in their bid to be champions of Women’s National Division One with a comfortable win over GHK at Old Anniesland.

Goals from Bronwyn Shields, Susie Gillman, Emma McGregor and Zara Mason gave ‘Dale Western a routine win.  The win sees the L1s move up to 2nd in the league table, two points off top spot and league leaders Edinburgh University.  This was after Uni drew with league challengers Grove Menzieshill on the same day.  The results mean if Clydesdale Western win all of their remaining league games, they will be champions of the Women’s National Division One 2017-18 season.

In the rest of Saturday’s games, the M2s kept up their league challenge with a 5-3 win over Edinburgh Uni 2s at Titwood.  Antony Small, 2s captain Adam Docherty, Steven Clark, David Clark and Neil Fulton were amongst the goalscorers as the M2s remain two points off top spot of the Men’s Regional Division One table.  The M3s also kept up their league challenge in the Men’s West District Division One table after beating Kelburne 3s 2-0 at Glasgow Green.  First half goals from Colin Moulson and David Sturgess settling the contest to keep the M3s three points behind league leaders Uddingston 3s.  The M4s dominance in Men’s West District Division Three continued after putting eight past Helensburgh 2s at Titwood.  A treble from Jamie Green was backed up with a goal each from Tim Hart, Ronnie Bleach, Ben Mitchell, Russell Bradley and Same Cole.  The M4s are still 14 points clear at the summit of Division Three.  The M5s lost by a single goal to Ayr 2s at Wellington.

In the ladies games, the L2s won 3-1 against the L3s to keep up their hopes of regaining the Women’s Championship League prize. A brace from Annabel Ballantyne and a single goal from Lesley Cosh gave the L2s the win, with Rachel Whittle scoring for the L3s.  The L4s strong end to the Women’s West District Division One season continued after beating Giffnock 1s to go 3rd in the league table.  Karen McQuarrie’s hat-trick giving the L4s a 3-1 win at Titwood.  Finally, the L5s hammered the L6s 8-0.  Lucy Anderson grabbed four goals whilst Lauren Halley and Jessica Kelly chipped in with two each.

Well done to all of our teams for some excellent results over the weekend!