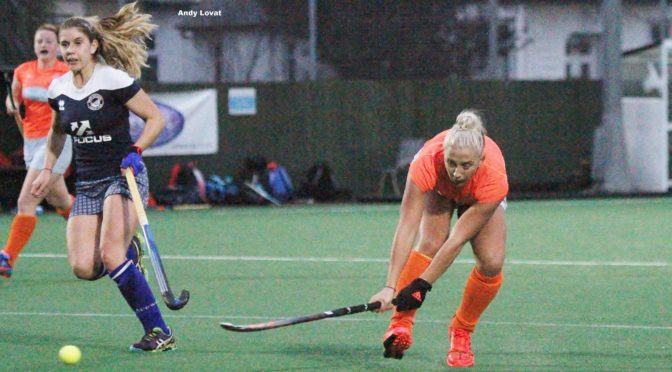 Before we review the games that took place from Saturday up to Tuesday night, there were postponements on Saturday for the M1s, M3s, M4s, L1s and the L6s. The M5s and L5s were beneficiaries of concessions, giving them three points despite no play.  All home games on Saturday were kept on thanks to the hard work of chairman Donald Amour, pitch convenor Karl Richmond, Men’s 1s coach Ciaran Crawford, Euan Lindsay, David Nairn and Struan Walker who cleared the pitch prior to pushback on Saturday.

Clydesdale Western 1st XI kept up with the leading pack in Women’s National Division One and maintained their hopes of becoming champions at the end of the season following a dominant win away to Grove Menzieshill on Tuesday night.

‘Dale Western are in need of dropped points from the teams around them, as well as winning all of their own remaining league games. The L1s game with Grange EL on Saturday was postponed due to weather, meaning they had to wait until Tuesday night to play their first game since their home draw with Glasgow University.

In the game against Grove, Clydesdale Western began the game well applying a lot of pressure to the home side. But the final pass was lacking to force any clear cut chances. But when that pass did connect, it won a penalty corner which was converted emphatically by interim captain Frances Lonergan. The home side hit back shortly after, however, scoring through a penalty corner routine of their own to level the scores going in at half time.

The second period saw more of an open feel, with both sides having chances to take the lead. And crucially, it was ‘Dale Western who saw Millie Steiger in composed form to round the Menzieshill goalkeeper and tap in to an empty goal. The away side then scored the important third after good skills from Lexi Sabatelli saw her enter the circle and fire a shot into the net for 3-1. The L1s made sure of the points when Bronwyn Shields found space in the circle to selflessly set up Heather Howie for a simple finish. The three points sees Clydesdale Western jump up to second in WNL 1, two points behind leaders Edinburgh University with three games to go.

Clydesdale Men’s 2s suffered a home defeat to Grange 2s in an entertaining Men’s Regional Division One clash at Titwood on Saturday.

Both sides started the game at a quick pace, and had chances to score. Most notably for Clydesdale 2s, it was Ciaran Crawford who saw a drag flick corner crash the woodwork and David Henderson being denied by the Grange 2s ‘keeper. Equally, the M2s ‘keeper Gordon Clark made some super saves and clearances but had no chance in keeping out Grange 2s opener five minutes before half time. A penalty corner being converted by ex-Clydesdale player, Ben Docherty.

The second half brought more consistent pressure from the home side, culminating in a few awarded penalty corners, namely won by youngster Ian King. Crawford was denied in the first, but was not to be stopped for the second corner which, despite the best efforts of the goal-line defender, crept over the line. The M2s stepped up, but left too much space at the back ten minutes after the equaliser, which opened up a counter attack for Grange 2s, converted in the scrappiest of manners at the back post. The away side converted another penalty corner moments after and despite the home side’s best attempts, the M2s could not force another goal. The 3-1 loss keeps Clydesdale 2s ninth in Men’s Regional Division One.

Clydesdale Western 2nd XI scored a goal in each half to see off the 3rd XI in a heated battle at Titwood in a late Saturday passback in Women’s Championship Division One.

The L3s started the game well, and were perhaps unlucky not have scored in the opening ten minutes via a penalty corner that was miraculously saved on the line by the L2s defence. And it proved to be crucial as minutes later, the L2s broke away through Annabelle Ballantyne, who squared the ball for fellow forward Rhona McGregor to slam home a tap in. Despite the opening goal, it failed to separate both sides who created chances but were unable to take them. The L3s were again unlucky not to score, after Ruth Bowie had rounded Mairi Fletcher with the seemingly simple task of squaring proceedings. L2s captain Lesley Cosh made the latest of last ditch tackles to stop the L3s forward scoring, but in doing so sadly saw a serious looking injury for Bowie in the aftermath of the challenge.

Both sides started the second half in similar fashion to how it finished. The L3s did their best to fashion chances through Gill Green and Rachel Whittle, whilst Lucy Arnold was denied following a stunning save from L3s goalkeeper Cara McAllister. McAllister was eventually beaten moments later when Naomi Harkness picked up a loose ball to reverse high and effectively kill the contest. Green had another penalty corner chance at the end but found Fletcher equal to it as the L2s saw out the remainder of the game.

In the two Women’s West District games that took place over the weekend, saw the L4s lose at home to Hillhead 3s.

Anna Winter kept up her impressive form which has seen her move up to the L4s by scoring a goal, which ultimately proved to be a consolation in a 4-1 home loss to Hillhead 3s. The defeat keeps the L4s fifth in Women’s West District Division One.

The L5s took a point in their Monday night clash with Garnock 1s at Titwood. Katrina Meikle scored for the L5s to also keep them fifth in Women’s West District Division Two following their awarded concession from Saturday.