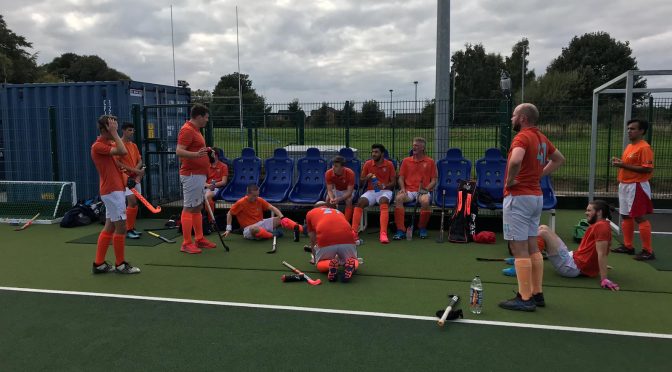 Clydesdale Men’s 3s went down late on to Uddingston 3s at Bothwell Castle Policies in their opening fixture of the Men’s West District Division One season.

The M3s started the game well against a strong Uddy side, scoring twice midway through the first half. Mitchell Pritchard converted from close range before Peter Justice hit home a penalty corner.

The home side pulled one back from a corner rebound just shy of half time, before scoring two well worked goals at the start of the second period. Craig Bradley’s side scored an equaliser when Ali Bleach scored a smart corner. The game was on a knife edge with both sides having equally as good chances. Clydesdale’s best moment coming from Ruairidh Callaghan’s driving left to right run and shot which was denied by a solid save from Uddy’s goalkeeper.

But the final goal would come from the home side. Uddy’s matchwinner was given valuable time and space to sweep home past a helpless Dougie Mann less than five minutes from time.

Clydesdale Men’s 4s were beaten by GHK 1s at Hutchesons’ Grammar School in their opening fixture in Men’s West District Division Two despite a strong display.

The M4s make up of young, talented but inexperienced players at senior level flanked by a few older heads was vastly different in comparison to their visitors who possessed a strong adult presence. Despite this, the M4s arguably deserved their 1-1 scoreline at half time, with Lewis Gambles grabbing the home side’s goal.

But GHK’s experience came to the fore, scoring three unanswered goals to take maximum points. Despite the loss, the M4s youngsters performed with great tenacity throughout, especially Guy Hogan who notably had an excellent game.

Clydesdale Men’s 5s came out on the wrong side of a 4-2 scoreline to Uddingston 5s at Bothwell Castle Policies in an early pushback in Men’s West District Division Three.

A goal each from Niklas Lange and Nathan Bean sadly was not enough to stop the M5s registering a loss in their season’s opening fixture.

The new Clydesdale Men’s 5s Development side announced their potential by taking a point away from Auchenhowie against Western Wildcats 5s in Men’s West District Division Three – but were minutes away from sealing all three points.

A terrific performance was put in by all representing the M5s Development side which only had three adults in the matchday squad for the league opener.

It was an adult, ironically, that would open the scoring for Clydesdale. Spencer Cox scored in what was looked like being a matchwinner until the home side grabbed an equaliser, taking advantage of some tired, opening day of the season legs two minutes from time.