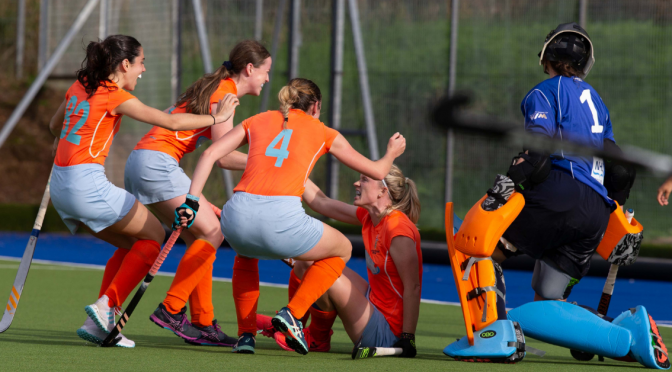 Clydesdale Western 1s had to come from behind twice to make it two wins from their opening two Women’s Premiership games following a last gasp win away to Western Wildcats Ladies 1s on Saturday.

The L1s were indebted to a late winner by hat-trick hero Fiona Semple, set up brilliantly by Heather Lang, who added the first of the away side’s four goals.

Head Coach Derek Forsyth recalled Alison Eadie and Lexi Sabatelli to his squad, but was without forward Emma McGregor for the clash with Wildcats. The game itself simply did not start well on the scoreline front for ‘Dale Western, who quickly found themselves two goals down in the opening stages. The visitors did find a route back in to the match quickly, however, when Lang was picked out by Ali Eadie to slot away and reduce the deficit. Opportunities for the L1s to level came and went in the form of penalty corners before half time approached.

The second half performance was a major improvement on the first half by Clydesdale Western, who eventually levelled the scoreline through a well-executed corner routine finished off by Semple. Corner conversions seemed to be the way forward for both sides following Semple’s equaliser – Wildcats nipping back in front before Semple added her second goal to level once more.

The game was very much on a knife edge until, with barely any time left on the clock, an effective L1s press concluded with an impressive turn and pass by Lang for Semple who lifted over the Wildcats goalkeeper and seal the win for Forsyth’s team.

Despite scoring three goals – a double from captain Andrew Allan and a maiden 1st XI goal for Jamie Green – the M1s conceded four more goals to their Milngavie opponents to go down 7-3 in their second league match since returning to competitive hockey last weekend.

It was an action packed opening quarter and Clydesdale will have been pleased with how they started. Especially after going a goal ahead from Allan’s short corner conversion. The home side responded just before the end of quarter one though, drawing level following a counter attack. The second quarter was much of the same. Allan’s second corner goal put Crawford’s side back ahead but despite having a good share of possession, Western levelled in similar vain to their first.

After half time was when the game began to unravel for the M1s. Sloppy turnovers and defensive errors saw Wildcats punish their opponents with three unanswered goals. The away side found a way back into the match when Green tapped in at the back post for his first ever Clydesdale Men’s 1st goal at competitive level. Clydesdale needed two more goals and two more goals were scored – but only by the Milngavie side who eventually saw out the final knockings of the game to secure three points.

In the rest of the weekend’s games, the M2s and L2s maintained their 100% starts to their respective seasons with comfortable wins.

Stuart Banford’s M2s side saw off Inverleith 2s at Mary Erskine School. Johnny Bradley scored twice, while Ruaraidh Callaghan scored the other in a 3-0 away win in the Men’s Regional Division. Rachel Whittle, Rachel Brown, Sophie Highet, Rosie Tudor and Rhona McGregor were all on target in the L2s 5-0 win at Hutchesons’ Grammar School (HGS) against Grove Menzieshill 2s in Women’s Championship Division One.

Sadly, the other five games over the weekend that took place for Clydesdale & Clydesdale Western teams ended in defeat.

In Men’s West District Division Three, the M5s lost 3-0 to Stepps 2s at Millerston, whilst Spencer Cox’s brace was in vain for M5s Development who went 4-2 down to Western Wildcats 4s at Auchenhowie.

In Women’s West District Division Three, the L6s were beaten 4-0 at HGS by GHK 4s. A goal each from Emma Gilmour and Lily McKaig proved to be futile for the L5s, who lost 3-2 to Glasgow University 4s in Women’s West District Division Two. Back to the Women’s Championship Division One, the L3s were convincingly beaten 5-1 by Erskine Stewart’s Melville 2s at HGS on Sunday – McGregor scoring a mere consolation for the home side.