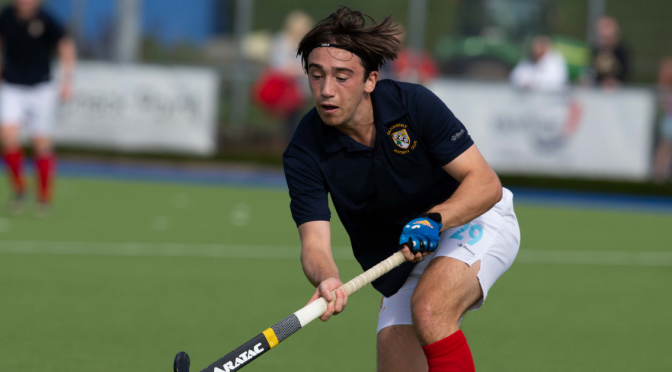 Clydesdale Men’s 1s long awaited return to competitive hockey at Titwood ended in a disappointing defeat to Inverleith on Saturday in the Men’s Premiership.

Despite scoring three goals, the M1s ended up on the wrong end of a 3-4 scoreline to their Edinburgh opponents, meaning Ciaran Crawford’s side stay on six points after four games. A goal each from Ali Douglas, Gregor Hirst and Euan Lindsay – all of which were assisted by David Nairn who was excellent throughout the contest – rendered meaningless as Clydesdale will now look to bounce next Saturday away to Grove Menzieshill 1s.

Going into the game, Crawford was boosted by the returns of Gregor Hirst, Sam Hayes, Graham Dunlop, Jamie Green and Ben Cosgrove. But was without skipper Andrew Allan, Jack McKenzie and Sammy Kasto.
The Titwood side started the game brightly and were unlucky not to take an early lead when Patrick Lonergan’s sweep shot was equalled by an excellent reaction save. Not long after, Ali Douglas opened the scoring, converting a tap in following superb baseline skills from Nairn matched by a measured short pass for his teammate to latch on to. But the home side were caught napping straight after when a ball from Inverleith’s right hand side was played into the circle and the away side’s forward nipped in ahead of goalkeeper Calum Douglas to deflect in and level the scores. The Edinburgh side then took the lead in the second quarter from a drag flick penalty corner.

The second half was the expected effort from ‘Dale to try and force an equaliser. Chances came and went, most notably in the form of corners. But with regular flicker Allan unavailable, Clydesdale were unable to break the Inverleith’s resistance. And the Edinburgh side’s dogged defence was rewarded with a third goal. Despite an excellent stick save from Calum Douglas, an away side forward was unmarked for the rebound and slotted in to the ‘Dale goal with ease.

The final quarter brought an early ray of hope when Nairn drove round the Inverleith circle before teeing up Gregor Hirst for a close range finish, reducing the deficit to one goal. But that lasted no more than five minutes, when an Inverleith forward escaped ‘Dale’s defensive attention and brilliantly tucked away a flicked shot in off the post leaving Calum Douglas helpless. With five minutes to go, the home side set up a big finish when Nairn took on the Inverleith defence again and found Lindsay, who calmly converted.

But despite a number of flashes across goal, the M1s were unable to find an equaliser with the short time that remained, leaving them empty handed.

Emma McGregor announced her return to the Clydesdale Western 1st XI squad with two goals to help see off Uddingston 1s at Titwood in the Women’s Premiership on Saturday.

A double from McGregor and one each from fellow forwards Heather Lang and Lexi Sabatelli helped seal a 4-0 win. The scoreline could, and arguably should, have been more with the amount of chances ‘Dale Western had, but Head Coach Derek Forsyth will no doubt be happier with his L1s side keeping their third clean sheet from four completed league games.

As well as McGregor’s return, Forsyth brought Lucy Bliss back into the team, whilst Karin Belch and Annabel Ballantyne dropped out from the squad that played in the previous weekend’s big win against Edinburgh University 1s.

Going into the clash with the Bothwell side, on paper, the Titwood girls would have been favourites to take maximum points. And it was no surprise that the L1s began with relentless pressure on the Uddy goal, which brought McGregor’s first goal to get the L1s up and running. Jen Eadie’s long corner was played into McGregor who drove into the circle before finishing with a reverse stick shot. Such was the domination, the home side were effectively camped inside the visitors half. But a combination of strong defending, last ditch clearances and a number of excellent saves from the Uddingston goalkeeper kept ‘Dale Western restricted to just one goal by half time.

In the second half, the away side gained more possession and stepped further up the field to avoid a repeat of the first half pressure. But in doing so, more space opened up for Forsyth’s team who eventually doubled their lead when McGregor scored again, this time from close range. Two became three not long after when Lang collected and finished a rebound opportunity from a save by Uddy’s number one.
Lexi Sabatelli completed the scoring at four by rounding the ‘keeper and slotting into an empty goal. Much like the first half, plenty of chances were on offer, but no more than the four scored were taken.

The home side did have a few questions asked at the end, but nothing ever materialised in what was a quiet afternoon for goalkeeper Cara McAllister and her defensive unit led by captain Frances Lonergan.

Clydesdale Men’s 2s and Clydesdale Western 2s kept up their fine starts to their respective seasons by both recording home wins.

The M2s were without Head Coach Stuart Banford, but Ewan Fraser stepped in as caretaker coach for the weekend, starting with a league encounter at home to Greenock Morton 1s in the Men’s Regional Division. Both sides started well and the contest was on an even keel until Jeetinder Berman opened the scoring in the second quarter with a lifted shot into the net. Neil Morton Lloyd then kept up his fine goalscoring form with two goals in a short space of time in the third quarter. Morton Lloyd tapped in from penalty corner for goal one before unleashing a fierce reverse stick finish for his second. Jack Cassie completed the scoring for the home side from close range as the M2s saw out the win despite Greenock pulling one back towards the end. The M2s are now top of the Men’s Regional Division and are unbeaten after five games.

Meanwhile, the L2s kept up their 100% start to the season in the Women’s Championship Division One after a comfortable win over Erskine Stewart’s Melville 2s. Rachel Brown, Rosie Tudor and Annabel Ballantyne each scoring a goal to give Donald Amour’s side a 3-1 win, keeping the L2s top of the table in the process. A stark contrast for the L3s, however, who remain without a point in the same division. Despite a solid effort, the L3s lost 2-1 at home to Glasgow University 2s – Claire MacDonald grabbing a consolation goal.