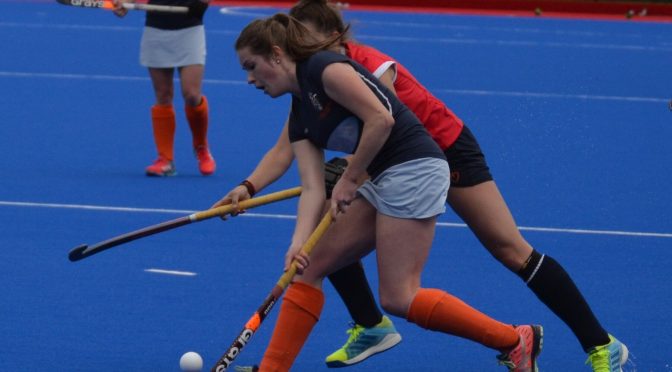 Clydesdale Western reignited their season as they narrowly beat Western Wildcats thanks to a superb late winner from Emma McGregor on Saturday at Titwood.

After a goalless first half, ‘Dale Western took the lead in the second half through Jen Eadie.  Wildcats responded with an equaliser and it looked as if the game was going to end level.  But late on, skipper Ali Howie produced a fantastic pass for McGregor who sent an equally fantastic reverse stick shot into the Wildcats goal.  The result inflicted Western Wildcats first defeat of the season, and in turn has opened up the Women’s National Division One League table.  Clydesdale Western are now up in the top four positions in the league table.

Clydesdale Western’s next league game is on Saturday, as they visit DISC to take on fellow league challengers, Grove Menzieshill.

Clydesdale Men’s 1st XI lost out by a single Western Wildcats goal in a scrappy contest at Titwood on Saturday.

In a game of few chances, Clydesdale best opportunities fell to Ciaran Crawford and Daniel Cain.  However, midway through the second half, Wildcats capitalised on a rebound to give them the lead.  That was how it was to remain, with the result seeing Clydesdale drop out of the top four spots in the Men’s National Division One League table.  Meanwhile, the win for Wildcats sees them take top spot.

Similarly to the girls, the boys take on Grove Menzieshill at DISC on Saturday.

In the rest of Saturday’s games, the M2s produced another top league display as they ran out 4-0 winners away to Uddingston 2s.  Neil Fulton was in the goals again, as he struck two penalty corners, whilst there was a goal each from David Henderson and David Clark.  The L2s kept up their 100% league start with a 4-0 win of their own against George Heriots 1s.  Tia Mansbridge scoring a brace whilst captain Julie Lonergan and Nicky Wilson grabbed a goal each.  The L3s lost out to Edinburgh University 3s with Ali Cox scoring a consolation goal.

Once again, great effort from our teams on Saturday!