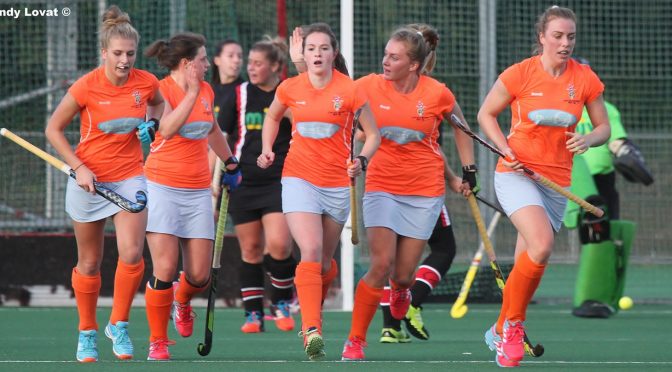 Clydesdale Western 1st XI comfortably beat Dundee Wanderers in their final league game of the 2017-18 Women’s National Division One season at Titwood on Saturday – but ultimately missed out on the league title following Edinburgh University’s win at Western Wildcats.

Braces from Emma McGregor and Millie Steiger, and one from Heather Howie gave ‘Dale Western a routine 5-1 win against Dundee Wanderers.  Uni’s 3-1 win at Auchenhowie, however, meant the girls finished two points behind the students who claimed their fourth consecutive title.  The L1s 2nd place finish means they will face Grove Menzieshill 1s in the Women’s National Play-Offs in a bid to secure European hockey for next season.

Clydesdale Men’s 1st XI finished the 2017-18 season with a scrappy late win against Dundee Wanderers at Titwood on Saturday.

The M1s found themselves in all kinds of trouble, as they went 3-1 down midway through the first half, despite Struan Walker initally cancelling out Wanderers opening goal.  Wanderers forward Bobby Ralph notched up a first hat-trick, before Chris McFadden reduced the deficit from a penalty corner.  McFadden had the opportunity to level scores before half-time from the penalty spot, but had his effort saved.

The second half was proving to be as frustrating as the first, but veteran Graham Dunlop popped up to score Clydesdale’s equaliser.  The level scoreline didn’t last long as Ralph deflected in a fourth goal for the Taysiders.  But with five minutes to go, Clydesdale produced a fantastic finish as Andrew Allan levelled from a penalty corner, before Walker scored a second goal.  A fierce reverse stick shot giving the Scotland U18 player his 14th goal of the season, but more importantly give the home side all three points.

Clydesdale Men’s 2s also signed off their season with a 4-1 win against Grange 2s at Fettes College – securing 3rd place in the Men’s Regional Division One table.  The M2s produced a brilliant first half performance in which they led 3-0 following goals from captain Adam Docherty, Neil Fulton and Jeetinder Berman.  Despite the Edinburgh side pulling a goal back, Fulton secured all three points in the second half with a penalty corner strike.  The L2s are two wins away from retaining the Women’s Championship Division One title after their 5-2 win against Watsonians 2s at Titwood thanks to a hat-trick from Sarah McHugh and a brace from Lesley Cosh.  The L3s kept up their hopes of finishing 4th in the same division after a narrow 3-2 win away to George Heriots FP 1s – Gill Green scoring two, whilst Lucy Patrick got one.

Well done to our teams, especially to Clydesdale Western 1st XI.  Despite missing out on the league, the club are delighted with your efforts and wish the best of luck for the remaining games of the season.  Well done to the men’s teams too for wrapping up their excellent efforts this season.