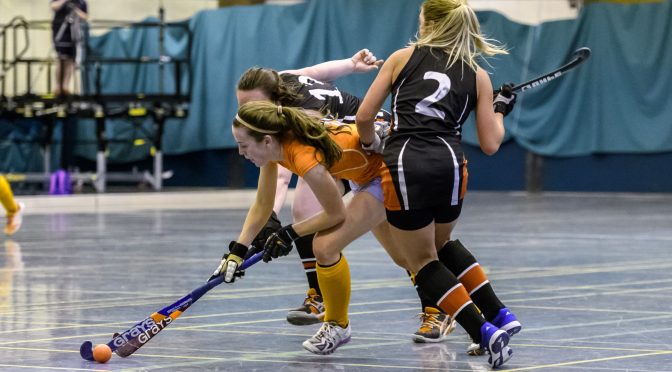 Clydesdale Western 1s began the defence of the Women’s National Indoor Division One title by picking up four points in their opening fixtures at Bell’s Sports Centre, Perth.

A long day was in store for the L1s, who were on the first, the middle and the final games of day at Bell’s on Sunday.  Game 1 against Hillhead 1s finished 4-4, thanks to a late equaliser from their west end opponents.  Then in their second match, the girls got into their stride by hitting ten past CALA Edinburgh 1s without conceding.

The final game of the day was always going to be the toughest as they played last season’s finalists in Dundee Wanderers 1s.  Wanderers bounced back from going a goal down early to lead 6-2 at half time.  The L1s did pull a goal back towards the end of the second period, but the 6-3 scoreline was how it would remain till the final whistle.

Clydesdale Men’s 1s got their season off to a decent start in Men’s National Indoor Division One at Bell’s Sports Centre in Perth on Saturday.

The M1s were initially expected to be in for a difficult start having been drawn to play last season’s Play-Off Finalists Kelburne and Inverleith on the opening weekend of indoor.

However, the ‘Dale got off to a cracking start by beating Kelburne 9-2 in their morning match.  Their second and final game proved to be a bit tougher, when they were beaten 8-3 by champions, and most likely league favourites, Inverleith in the afternoon passback.

Clydesdale Western 2s got their indoor season off to a flyer by winning both games in their opening fixtures in Women’s National Indoor Division Two at Dundee International Sports Centre.

The L2s narrowly beat northern side Granite City Wanderers 4-3 in their morning game.  Then in game two, the L2s comfortably dispatched Kelburne 1s 7-0.

On Sunday, the L4s booked a place into the Quarter Finals of the Women’s West District Cup after seeing off a stirring comeback from Loch Lomond 1s.  The L4s were 2-0 up at home, but the visitors clawed their way back into the game with two goals.  ‘Dale Western 4s had time to conjure up a third and winning goal to qualify for the next round of the cup.  Goals for the L4s came from Georgia Schmolke, Claire MacDonald and Sophie Watkiss